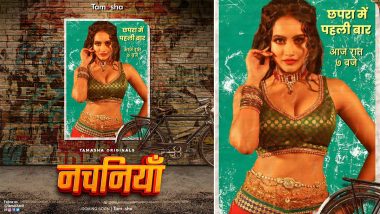 Singer-actress Amika Shail is all set for a rural makeover in her new OTT show. In the upcoming 15-episode web series tentatively titled Nachaniya, Amika will be seen playing a village girl. The story revolves around three female friends who entertain people in villages with dance performances. "The name of my character is Dhaani and she is a naive village belle. It is very different from what I am in real life. Mirzapur Season 2 Actress Amika Shail Opens Up About Making It to the Second Season of the Amazon Prime Show.

Dhaani is not career-oriented in life and her only goals are to find her Prince Charming and get married. All she thinks of is setting up her home with her husband," said Amika. Directed by Shraddha Pasi, the series also features Vikram Singh Chauhan, Sandeepa Dhar, Nimai Bali and Deepak Qazir. Akshay Kumar’s Laxmmi Bomb Co-Star Amika Shail Says Working with the Actor Is a Dream Come True.

Amika can't help gushing over her director. "Shraddha is a fantastic director and knows how to get the best output," she said from her experience of woking in the series, which will get a new title soon and is set to drop on Disney+ Hotstar in April.

Amika has previously worked in the Akshay Kumar-starrer film Laxmii, besides the web series Mírzapur 2 and Gandii Baat. She has also appeared on the TV series Baalveer Returns.

(The above story first appeared on LatestLY on Mar 23, 2021 10:05 PM IST. For more news and updates on politics, world, sports, entertainment and lifestyle, log on to our website latestly.com).