Sushant Singh Rajput's Pavitra Rishta Co-Stars paid him a tribute at the Zee Rishtey Awards 2020. After actress Usha Nadkarni, Ankita lokhande too took to the stage to pay an emotional tribute to Sushant. 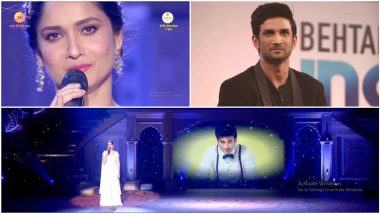 Actress Ankita Lokhande was one of those people on the front alongside late actor Sushant Singh Rajput's family during their fight for justice for him. Sushant Singh Rajput died by suicide on June 14. His body was found hanging from the ceiling of his Bandra home. And while his death became a media circus that has died down now, the void that the actor left will never be filled.

And now, Sushant's Pavitra Rishta team paid him an emotional tribute on Zee Rishety Awards. Recently, we saw how actress Usha Nadkarni broke down remembering her on-screen beta. And now, his co-star Ankita Lokhande, who was also Sushant's girlfriend for over 6 years, took to the stage to deliver an emotional message about Sushant.

(The above story first appeared on LatestLY on Dec 18, 2020 05:30 PM IST. For more news and updates on politics, world, sports, entertainment and lifestyle, log on to our website latestly.com).