My character is very irreverent and funny which adds to the show's entertainment." Produced by Ding entertainment, directed by Santosh Singh, 'Apharan 2' will be streaming from May 24 on ALTBalaji. 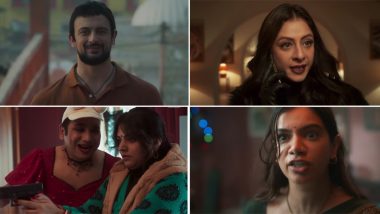 The makers of the web series Apharan have just dropped the trailer of the second season. Ekta R Kapoor's Apharan 2 features Arunoday Singh, aka Rudra Shrivastava, travelling from the ghats of Haridwar to the icy locales of Serbia for a secret mission. Apharan 2 Trailer: Arunoday Singh’s Action-Packed Series Promises To Be An Entertaining Ride (Watch Video).

The trailer also features Nidhi Singh as Ranjana Srivastava who plays Rudra's wife battling drug addiction. Also featured in the trailer is Snehil Dixit Mehra as Gillauri and Saanand Verma as Satyanarayan Dubey. Talking about playing Ranjana, Nidhi Singh said: "My character Ranjana finds herself in a world of trouble this season, and her husband Rudra will move heaven and earth to help her. Be it complex plot twists, exciting characters, or a foot-thumping soundtrack, the makers have outdone themselves this time." Veteran Actor Jeetendra to Play a Cameo in Apharan 2.

"The show takes off from the very first episode itself! I am thankful to Ektaa for casting me again in the second season of this brilliant show. Viewers are in for a treat with this second season." Talking about her role, Snehil aka Gillauri, said: "From being a creative director in the first season to essaying such a fun, quirky yet important role in the second season, this has been an absolute joyride for me. Playing Gillauri was a lot of fun.

My character is very irreverent and funny which adds to the show's entertainment." Produced by Ding entertainment, directed by Santosh Singh, 'Apharan 2' will be streaming from May 24 on ALTBalaji.

(The above story first appeared on LatestLY on May 19, 2022 02:49 PM IST. For more news and updates on politics, world, sports, entertainment and lifestyle, log on to our website latestly.com).