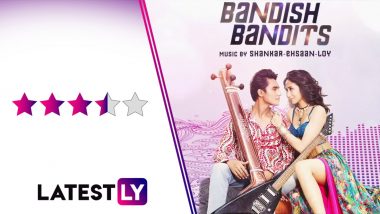 Bandish Bandits Review: As India gets accustomed to content on offer in OTT platforms, mostly thanks to lockdown, we have had our share of dark series, comic ones, horror shows and even the many sleazy ones made in the name of entertainment. What was yet to be tapped was a fictional show that focuses on music, like Empire or Mozart in the Jungle or even Glee for the matter. Which is what makes Amazon Prime's new Hindi series, Bandish Bandits such a refreshing watch. Bandish Bandits: Shankar-Ehsaan-Loy Set for Their Digital Debut With Amazon Prime’s Musical Series.

The plot is simplistic enough. Radhe (Ritwik Bhowmik) is a classically-trained singer belonging to a family of reputed musicians in Jodhpur. Tamanna (Shreya Chaudhry) is a popular indipop artist from Mumbai, who is a one-hit wonder and is in desperate need for another. Radhe's life-goal is to be worthy of his grandfather, the famed but hard-to-please Pandit Radhe Mohan Rathod (Naseeruddin Shah), who is the Sangeet Samrat of Jodhpur, and a hard task-master. Their family is famed for the musical talents, though the lack of income has put Radhe's father (Rajesh Tailang) in debt.

He, of the clean-shaven looks, symbolises innocence like the music he practises. She, of the multi-coloured haired, has her music breezy and crowd-pleasing with some help from auto-tune.

Tamanna, who initially dismisses Hindustani music as someone who sounds when a goat is strangulated, is impressed with Radhe when she hears him sing a raga after her concert in Jodhpur. She pursues him to sing a song with her. He is attracted to her free-spirited attitude but doesn't want to disappoint his grandfather, who is against commercialisation of classical music.

After much cajoling, Radhe agrees to be one part of her two-parter Bandish Bandits, and in the process, begins to fall for Tamanna.

There is also a parallel track of Panditji training Radhe for a classical singing competition, where their mansion's ownership is at stakes. Ritwik Bhowmik Recalls Taking Tips from Naseeruddin Shah on How to Look Exhausted for a Shot.

Directed by actor Anand Tiwari, Bandish Bandits' biggest strength is the prominence it gives to music. It is the kind of series, where the composers, the singers deserve equal status as the cast if not more. Shankar-Ehsaan-Loy has composed their best work for Bandish Bandits, truly creating a masterpiece in soundtrack with their leanings towards Indian classical music. Never had I enjoyed the music of any show or movie, as much as I loved and relished the ragas and thumris in Bandish Bandits.

In an era where Bollywood music has been accused of being artificial and remixing their own songs, the score of Bandish Bandits highlights the importance of returning to the roots and showcase the magic of Hindustani music. It is not just the classical tracks like "Viraha" and "Garaj Garaj" that leave an impact, but even the fusion songs like "Sajan Bin" that make their mark.

Watch the Trailer of Bandish Bandits:

Before I make this review sound like a music review, let me talk about the other aspects of the show. Novelty may not be the strength of Bandish Bandits, with traces of other films like Abhimaan, Sarvam Thaala Mayam and even, Patiala House, in the narrative. But Bandish Bandits becomes better and better, when both its parallel tracks intersperse with each other.

Just watch how the series intercuts two contrasting scenes of Panditji asking Radhe to sing in a low pitch at their haveli, and then Tamanna making him sing in a high pitch at the recording booth. A similar scene is played later when Radhe helps train Tamanna in singing live with some success, whereas the scene running parallel has him disappointing his grandfather with his singing. Such sequences make Bandish Bandits a treat to watch, with Tiwari's handling excelling over the predictable writing. The dialogues deserve special mention, though.

The series, in its own sly way, takes digs at why we are not getting the music we deserve to listen to. It points out how the maestros have sheltered their music so much, in fear of it getting tainted, that it is now isolated from the general audience. The corporatisation of music is also mocked out, when one character points out to a studio boss that he doesn't know the real thing, because even the milk he is drinking is not real.

Still, there are certain weak areas, especially in the initial episodes that makes the drama wobble. The romantic track between Radhe and Tamanna feels too familiar, and even confusing with its detours. While Bandish Bandits may have been promoted as a love story between two diametrically opposite singers, it is the romance that becomes slacker after the initial mischievous nok-jhok.

Tamanna's story is often put on the backseat with the focus mostly on Radhe's struggles of having a dual life, with she becoming just an element that helps him spread his wings far and wide. Which bizarrely also reflects in her arc later in the series. I wish there could have been more prominence on Tamanna's fears of being haunted by her mother's undermining attitude, or her dreams of singing with her idol. Radhe's arranged engagement to another talented singer Sandhya (Tridha Choudhury) is made a crucial part of the proceedings, only to be dropped later.

Instead it is the Rathod family shenanigans that makes Bandish Bandits more engrossing, especially with the arrival of Atul Kulkarni's character. The ensuing dramatic saga leads to a musical jugalbandi in the final episode. Needless to say, it is an enthralling mix of thrilling anticipation and some goosebumps-inducing musical interludes, with a brilliant twist that I really didn't expect.

The cast also makes Bandish Bandits work. Both Ritwik Bhowmik and Shreya Chaudhry are competent and likeable as the main leads. Ritwik, especially, sparkles in the music portions.

The supporting cast brings more strength in the show. There is no measure of how incredible a performer Naseeruddin Shah is, and it is just wonderful to see him own the role of the rigid-minded Pandit that has shades of grey. A dependable Sheeba Chaddha, who plays Radhe's mother, is initially seen in the sidelines, but gets to be a major part of the story in the latter part. And she is magnifique.

Atul Kulkarni is fabulous, as always, and he brings a lot of depth in the final episode. Kunaal Roy Kapur is hilarious as the foul-mouthed director of Tamanna's videos, having some of the best lines. The underrated Amit Mistry, who plays Radhe's uncle, brings a nice mix of humour and pathos as a byproduct of Panditji's rigid training. Rajesh Tailang, Rahul Kumar, Rituraj Singh and Meghna Malik are awesome in their respective roles.

Bandish Bandits is also beautifully photographed by Sriram Ganapathy, putting to good use the exotic locales of Jodhpur, and occasionally Udaipur. The production design also deserves special mention, for bringing a royal touch to the look of the series.

Bandish Bandits may get a couple of notes out of tune with its predictable script. Where it gets the melody right is with the emotions, the performances and of course, S-E-L's winning, soulful soundtrack. This is a treat for all lovers of Hindustani music. Bandish Bandits is streaming on Amazon Prime Video.

(The above story first appeared on LatestLY on Aug 04, 2020 02:22 AM IST. For more news and updates on politics, world, sports, entertainment and lifestyle, log on to our website latestly.com).