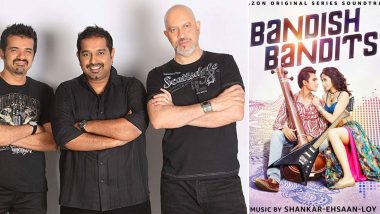 Composers Shankar-Ehsaan-Loy are excited about working in the OTT space for the first time. The composer trio has scored the original soundtrack of the upcoming musical web series, "Bandish Bandits", and they say the project gave them a chance to experiment with contrasting musical genres. " ‘Bandish Bandits' is special for us in more ways than one. Not only does it mark our digital debut, the soundtrack also allowed us to experiment with contrasting musical genres ranging from Rajasthani folk and Indian classical to pop and combine them to create something wholly unique," they said. A Suitable Boy: Ahead Of Its BBC One Premiere, Ishaan Khatter and Tabu’s Web-Series Gets Positive Early Reviews!

"We've worked with artistes from across the country for ‘Bandish Bandits' and we're confident that the soundtrack has something for everyone. It's truly exciting and we hope the audience enjoys it as much as we enjoyed making it," they added. The music of the web show music was launched on Monday. "Bandish Bandits' is set in Jodhpur, and the show tells the story of Radhey and Tamanna, two young musicians hailing from contrasting backgrounds. Shining Girls: Elisabeth Moss to Headline Apple TV’s Thriller-Series Based on Lauren Beukes’ 2013 Novel

(The above story first appeared on LatestLY on Jul 27, 2020 03:59 PM IST. For more news and updates on politics, world, sports, entertainment and lifestyle, log on to our website latestly.com).