After Saumya Tandon said goodbye to &TV's hit sitcom Bhabiji Ghar Par Hain as Anita bhabhi, the makers were looking for a new face and locked Nehha Pendse as the new Anitaji. Now, finally, the makers have unveiled the first promo of Nehha as gori mem. Watch! 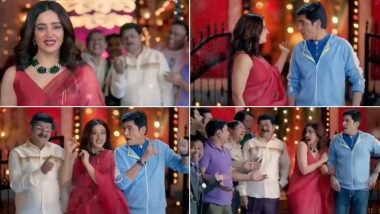 After Saumya Tandon said goodbye to &TV's hit sitcom Bhabiji Ghar Par Hain as Anita bhabhi, the makers were looking for a new face and locked Nehha Pendse as the new Anitaji. In fact, the actress also had started shooting for the comedy show a few days back. Now, finally, the makers have unveiled the first promo of Nehha as Anita bhabhi. The video is high on entertainment and sees Pendse looking alluring as the Gori Mem. In the clip, she can be seen wearing a red saree with sleeveless blouse. Bhabiji Ghar Par Hai: Nehha Pendse Finally Begins Shooting As Anita Bhabhi, Feels Elated!

The promo opens with Neha entering the society compound in an open rickshaw wherein the men of the colony go gaga over her beauty. The Bollywood music in the background adds quite a spice. All the characters in the video are happy on seeing Anita bhabhi. Apart from Neha, we also see Aasif Sheikh (Vibhuti Narayan Mishra), Shubhangi Atre (Angoori bhabhi) Rohitashv Gour (Manmohan Tiwari). Nehha Pendse on Replacing Saumya Tandon in Bhabiji Ghar Par Hain: I Would Request the Audience to Not Draw Any Comparisons.

Indeed, the promo looks appealing and Nehha as Anita bhabhi also seems impressive. Having said that, earlier in a conversation with IANS, Pendse had expressed and urged fans to not draw a comparison between her and Saumya Tandon.

"I would like to request the audience that they should not draw comparisons between Saumya and me. They should give me the opportunity and time with open hearts to get into the character. We are trying to make a seamless transition in the show, so we expect audience cooperation. I would urge them to be kind towards us," she had said.

(The above story first appeared on LatestLY on Jan 26, 2021 06:11 PM IST. For more news and updates on politics, world, sports, entertainment and lifestyle, log on to our website latestly.com).