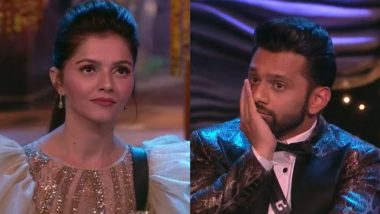 Salman Khan hosted controversial reality show Bigg Boss 14 has finally got its winner. And no surprises here, it’s Television actress Rubina Dilaik who was won the latest season. Well, along with the gorgeous trophy, the Shakti actress also took home a cash prize of Rs 36 lakh. While Rubina was crowned as the victor, Rahul Vaidya was the runner-up. Nikki Tamboli grabbed the third spot. FYI, Rakhi Sawant grabbed the Rs 14 lakh deal. Talking about Rubina, her strong opinions and also her badass attitude can be termed as one of the major reasons she lifted the winner’s trophy of BB 14.  Bigg Boss 14 Grand Finale: Rakhi Sawant Quits The Race With Rs 14 Lakh, Aly Goni Eliminated.

Rubina Dilaik entered the show along with her husband Abhinav Shukla, but even after this, she didn’t lose her individuality and came out as one of the strongest players in the game. From love, hate to revealing dark secrets, she flashed every emotion bravely on national TV and slowly and steadily became a fan favourite. Even in our poll, it was Rubina who had received the highest number of votes. All in all, her fate was to turn victorious. Bigg Boss 14 Winner Poll Results: Fans Predict Rubina Dilaik as the Victor; Rahul Vaidya Grabs the Second Spot and Rakhi Sawant Is Third!

For the unversed, Bigg Boss 14 winner Rubina is quite a popular face from the small screen. She started her career in acting as Radhika in Zee TV’s Chotti Bahu and then played the challenging role of a hijra (Soumya) in Colors TV Shakti. The beauty hails from Himachal Pradesh and was crowned Miss Shimla in 2006. Congratulations to her on winning BB 14!

(The above story first appeared on LatestLY on Feb 22, 2021 12:18 AM IST. For more news and updates on politics, world, sports, entertainment and lifestyle, log on to our website latestly.com).