Bharti Singh and Haarsh Limbachiyaa, after being questioned, were taken into custody for the possession of 86.5 grams of cannabis on November 21. And referencing to the same on his recent arrest by NCB, Haarsh cracked a joke on himself. 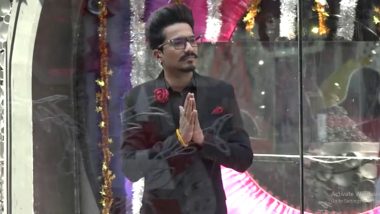 Bigg Boss 14 recently saw the entry of comedian Haarsh Limbachiyaa in the house along with Garvit Pareek. The pair entered the house during the Christmas special episode of Weekend Ka Vaar saw a lot of fun in the episode. It all began with Rubina Dilaik hosting a radio show, to the housemates putting up a performance for birthday boy Salman Khan, the episode was full fun. Bharti Singh and Husband Harsh Limbachiyaa Granted Bail In The Drug Related Probe.

However, Haarsh Limbachiyaa took the cake for being funny. The comedian was recently in the news for his arrest by the NCB for consuming ganja, along with his wife Bharti Singh, after their home in Andheri and office space were raided. During his segment on Bigg Boss 14 which was shot in the morning, Haarsh quipped, "Subah subah main aagaya kyunki aajkal mere ghar pe bhi log subah subah aajate hain...aur bahut kuch karke chale jaate hain..." Bigg Boss 14 Weekend Ka Vaar December 26 Synopsis: Salman Khan Questions Rahul Vaidya For Being Ungrateful To BB14.

Bharti and Haarsh, after being questioned, were taken into custody for the possession of 86.5 grams of cannabis on November 21. They were granted bail on November 23. NCB was supposed to file on the cancellation of the do's bail but that never happened.

(The above story first appeared on LatestLY on Dec 27, 2020 11:19 AM IST. For more news and updates on politics, world, sports, entertainment and lifestyle, log on to our website latestly.com).