Tonight's Bigg Boss 14 Weekend Ka Vaar with Salman Khan is going to get spicier. As after three weeks, the makers will finally unveil the faces of the wild cards. And guess what, the three have already locked horns. Check it out. 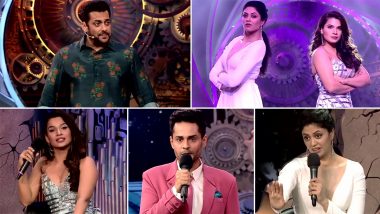 Tonight's Bigg Boss 14 Weekend Ka Vaar with Salman Khan is going to get spicier. As after three weeks, the makers will finally unveil the faces of the wild cards. It's Shardul Pandit, Kavita Kaushik and Naina Singh who will be entering the show as contestants. While Kavita is known for her FIR serial, Naina garnered love with Kumkum Bhagya. Talking about Shardul, he is mostly recognised for his role in Ronit Roy's Bandini. Cut straight to the latest promo released by Colors, the three wild cards engage in an argument in front of Salman Khan. Bigg Boss 14: Kavita Kaushik and Naina Singh All Set To Enter As Wild Cards On Salman Khan's Weekend Ka Vaar? (Watch Video).

It so happens that after Kavita and Naina, Salman introduces Shardul. The host then asks the man to meet the two ladies and also tells him what does he think about them? To which Shardul adds that he has met Naina and she also has sat on his lap. This comment by the lad irks Naina and she slams him for the same. Even Kavita gets fumed after listening to Shardul and tags him as a 'joker'. Finally, Naina concludes by saying that she will see him inside the house. Bigg Boss 14 Weekend Ka Vaar October 24: Salman Khan Slams Rubina Dilaik, Kavita Kaushik Makes a Virtual Appearance – 5 Highlights of BB 14.

This promo looks damn awesome and we bet that these three wild cards will surely add the required drama inside the house. Reportedly, Pavitra Punia's ex-boyfriend Pratik Sehajpal is also expected to enter Bigg Boss 14 as a wild card contestant. Stay tuned!

(The above story first appeared on LatestLY on Oct 25, 2020 05:12 PM IST. For more news and updates on politics, world, sports, entertainment and lifestyle, log on to our website latestly.com).