Tonight’s (November 14) episode of Bigg Boss 14 was emotional as well as dramatic. This one was a Diwali themed Weekend Ka Vaar with Salman Khan and as expected it was entertaining and how. Check it out. 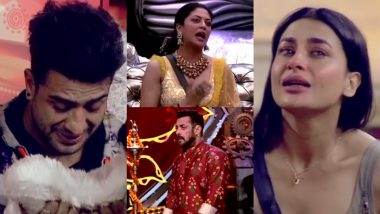 Tonight’s (November 14) episode of Bigg Boss 14 was emotional as well as dramatic. This one was a Diwali themed Weekend Ka Vaar with Salman Khan and as expected it was entertaining and how. Right from gifts arriving on the occasion of the festival from the contestants family to Kavita Kaushik and Eijaz Khan’s fight for ‘who is right’ in front of the host, we loved every bit of it. While the gifts bought tears to Nikki Tamboli, Aly Goni, Pavitra Punia, Rahul Vaidya's eyes, on the other hand, we saw chaos between Eijaz-Kavita. There were also a few fun guests on the show to spark up the festive night. Check out the highlights of Bigg Boss 14 below. Bigg Boss 14 November 13 Highlights: Eijaz Khan - Pavitra Punia's Mushy Romance, Abhinav Shukla - Rubina Dilaik Entering the Cage, 5 Highlights of BB 14.

The show starts with Salman Khan telling to Rubina Dilaik, Abhinav Shukla and Jasmin Bhasin on how the trio interpreted the jail task absolutely wrong. He also explained that the main purpose of the task was to pick two inmates who were to be punished and sent behind the bars. And as the three took it in the wrong sense, Bigg Boss gave them the saza.

Kavita Kaushik interrupts Salman Khan and rants about Eijaz Khan. She says that it was her foul/abusive language for Eijaz that got her eliminated from the show. But Eijaz used the ditto word at her in the gone by episode during their argument. So, her point was that why is Eijaz still framed in the right way and not being slammed or punished? Well...Bigg Boss 14 Promo: Kavita Kaushik Rants About Eijaz Khan to Salman Khan, Asks If He Deserves Punishment (Watch Video).

Catch it before TV on @VootSelect#WeekendKaVaar #BiggBoss14 #BB14 #BiggBoss2020 pic.twitter.com/m67sctTmT1

Kavita Kaushik supports Rahul Vaidya and slams Pavitra and Eijaz for faking their love story. To which, Pavitra screams and tries to put to her point. Punia also lambasts at Rahul being insensitive during the nomination task where he laughed when Pavitra cried and yelled at Eijaz to not ruin his doggies photo frame to save her.

As it is Diwali, family members of the contestants send in gifts and we see the housemates sobbing over the same. Nikki Tamboli says that she misser her fam as she has been staying away from them since three years, Pavitra cries and remembers her mother and we even see Rahul Vaidya missing her parents. Bigg Boss 14: Nikki, Pavitra Cry as They Get Diwali Gifts from Home, Rahul and Jaan Hug Out Their Differences (Watch Video).

The Good & Evil Enter The Show

The vamps Sudha Chandran, Monalisa and the sachai ki murats Surbhi Jyoti, Mahima Makwana enter the house to add some tadka. They give the housemates some fun tasks. But it is Rubina who stuns one and all by showing some sizzling moves in the dance task.

That's it, guys! These were top five highlights from BB 14 Saturday Weekend Ka Vaar episode. Now, it will be interesting to see who will get eliminated from the show among Rubina and Shardul Pandit. Stay tuned!

(The above story first appeared on LatestLY on Nov 14, 2020 11:02 PM IST. For more news and updates on politics, world, sports, entertainment and lifestyle, log on to our website latestly.com).