Looks like the makers want more drama on Bigg Boss 14, as going by the latest preview of tonight's Weekend Ka Vaar, Salman Khan declares that the finale is going to take place next week. Not just this, we also see Kamya Punjabi as one of the panellist grilling Jasmin Bhasin. Check out the video. 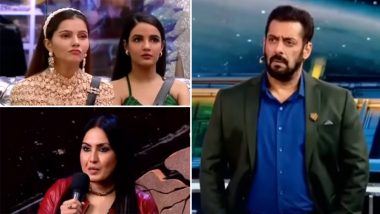 The makers of Bigg Boss 14 are leaving no stone unturned to add spice to the latest season. Right from bringing three seniors to mentor the contestants, Aly Goni's wild card entry to assigning tasks that lead to a battle between friends, the show is really getting interesting. And well going by the precap of tonight’s (Nov 28) Weekend Ka Vaar episode, the makers are all set to throw another bomb on the contestants as we see host Salman Khan telling them that the finale week this time is not happening in January 2021. We also get to see former BB contestants Kamya Punjabi, Devoleena Bhattacharjee and others as panellists. Bigg Boss 14 November 27 Episode: From Jasmin Bhasin's Team Winning the Task to Bigg Boss Announcing No Captain this Week, 5 Major Highlights of BB 14.

The preview starts with Kamya Punjabi grilling Jasmin Bhasin and also making Rubina Dilaik understand that Bhasin is not to be trusted. To which, we also see Jasmin replying back and making a fool out of herself. However, the most shocking twist comes in when Salman informs all the inmates that only four contestants from the lot will go to the finale week, that is about to take place next week (December). Bigg Boss 14: Aly Goni and Jasmin Bhasin Allegedly Discuss Their Contract Deets, Bad TRPs, Show's Extension In This Unverified Viral Audio Clip.

This sudden news by the host surprises one and all. And we wonder, what’s this new twist to the tale? This week it is Abhinav Shukla, Rahul Vaidya, Pavitra Punia, Aly Goni, Jasmin Bhasin, Rubina Dilaik who are nominated and it'll be interesting to see who among them will be shown the exit door on Sunday's Bigg Boss 14 episode. Stay tuned!

(The above story first appeared on LatestLY on Nov 28, 2020 12:46 PM IST. For more news and updates on politics, world, sports, entertainment and lifestyle, log on to our website latestly.com).