A tiff takes place between Soundarya and Tina. Tina later broke down as she denied the accusation put on her by Soundarya regarding stealing tofu. 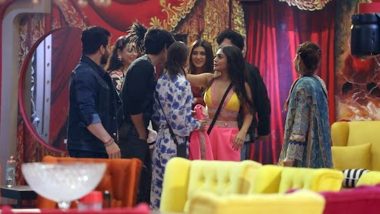 Fights are a common thing in the Bigg Boss 16 house and nothing is different about the upcoming episode of the controversial reality show as Soundarya Sharma and Tina Datta will be seen locking horns. A tiff takes place between Soundarya and Tina. Tina later broke down as she denied the accusation put on her by Soundarya regarding stealing tofu. Bigg Boss 16: Sreejita De and Vikkas Manaktala Enter Salman Khan’s Show as the New Wildcard Contestants.

She went through an emotional turmoil and asked why she would take something like food from anyone. She added that she only fights for chicken in this house and not even her own food. However, the morning for Tina started with a discussion with Shalin Bhanot about where they stand in their relationship. There have been constant ups and downs, and lots of arguments between the two. Bigg Boss 16: Shiv Thakare’s Ex Veena Jagtap Approached by Makers to Enter As Wild Card Contestant – Reports.

In an ongoing conversation, Shalin said to Tina to not worry about him and that he goes only where he feels wanted. He further added that whatever Tina is doing is correct and he is wrong. Upset Tina said to Shalin that she is the one wrong and thanked him for giving her a closure.

(The above story first appeared on LatestLY on Dec 08, 2022 03:17 PM IST. For more news and updates on politics, world, sports, entertainment and lifestyle, log on to our website latestly.com).