During a pyramid task inside the Bigg Boss OTT house, Millind Gaba was seen making fun of Neha Bhasin's last name. So, do you think, he was right in doing so. Vote and let us know your thoughts here. 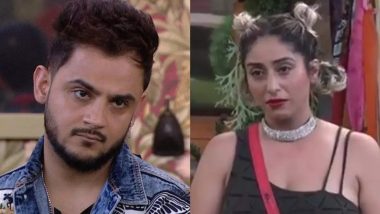 Bigg Boss OTT is serving fans pure entertainment. Be it the connection twist, Shamita Shetty-Raqesh Bapat's romance to Neha Bhasin's survival game, the audience is definitely loving the reality show. However, in this piece, we will be discussing Neha Bhasin and Millind Gaba's recent argument during the pyramid task. FYI, it was Neha Bhasin-Pratik Sehajpal versus Akshara Singh-Millind Gaba in another. Amid the task, in a verbal fight, Millind lost his cool and started saying ill things to Neha. Bigg Boss OTT: Shamita Shetty Gets Impressed by Raqesh Bapat After He Gives Her a Foot Massage, Paints Her Neck and More (Watch Video).

It was all okay until Millind made fun of Neha's last name. He compared it to  'wash-basin' and called her Neha Basin. The argument did not end there, as we also got to see the already fumed Neha warning Millind to keep a distance and saying, “I can feel your body which is not nice, thoda piche ho jao.” To this, Millind added, “Ye yaha body hi feel karne aayi hai. Kabhi Pratik ki, kabhi Raqesh ki.” For you to note, Gaba's this anger comes days after Neha broke her connection with him and choose Pratik. Bigg Boss OTT: Neha Bhasin Gets Slammed by Netizens for Her Closeness With ‘Connection’ Pratik Sehajpal.

Lastly, after the task got over and Millind also apologised to Neha, but all went in vain, as she was not okay with what he had said. This incident now created a riff between Neha and Millind. But what do you think as the viewers? Was Millind Gaba right in calling Neha a 'washbasin'? Tell us your views and vote below. Bigg Boss OTT: Divya Agarwal Trends on Twitter After Her Connection Zeeshan Khan Gets Thrown Out of the House.

Was Millind Gaba Right In Calling Neha a 'Washbasin'?

Just in case, you do not follow Bigg Boss OTT and want to binge in. You can watch the reality show on Voot Select, anytime of the day. This year, the digital version of Bigg Boss is hosted by Karan Johar. Stay tuned!

(The above story first appeared on LatestLY on Aug 29, 2021 07:12 PM IST. For more news and updates on politics, world, sports, entertainment and lifestyle, log on to our website latestly.com).