This time a Border Security Force (BSF) soldier also gave auditions for this show. It is a very unique thing that for the first time a serving soldier participated in the reality show. 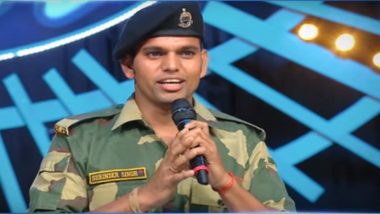 Auditions for the tenth edition of the reality show Indian Idol has begun. Like before, many contestants participated in giving auditions, but one participant was different from others. This time a Border Security Force (BSF) soldier also gave auditions for this show. It is a very unique thing that for the first time a serving soldier participated in the singing reality show. Surinder Singh from Punjab gave audition wearing his uniform. The BSF jawan sang 'Sandese Aate Hain' song from the movie Border in Indian Idol 10. He even got selected for the next round which is going to be held in Mumbai

It has given birth to a debate whether serving soldiers can participate in reality shows revealing their identity. For making public appearance serving soldiers need to take permission from the high command. Soldier singing patriotic songs can definitely boost the TRP of the show. It will have an emotional connect with the people. But, is it justified on behalf of the channel to utilize the patriotic sentiments only for their benefit?

When someone is participating in the reality show even minute detail of that person is aired on a national channel. In this case, showing the personal detail of a serving soldier can put him and his family at risk. In the race of TRPs how far the channels can go? Defence experts are of the opinion that the serving soldiers cannot be allowed to participate in these shows.

The tenth edition of the reality show Indian Idol is broadcasted on Sony Channel. This time singer Neha Kakkar, Music Director Anu Malik, and music composer and singer Vishal Dadlani are judging the show. Audition rounds are going on. The judges will select the talented singers from the auditions. After the audition rounds, chosen participants will compete among themselves for the title.

(The above story first appeared on LatestLY on Jul 15, 2018 08:02 PM IST. For more news and updates on politics, world, sports, entertainment and lifestyle, log on to our website latestly.com).