Dance Deewane 2 is one of the most loved dance reality shows. The show is hosted by Arjun Bijlani and Madhuri Dixit-Nene, Shashank Khaitan and Tushar Kalia are the judges. Tonight (September 28, 2019) is the grand finale of this much competitive show. 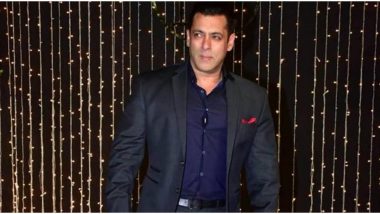 Dance Deewane 2 is one of the most loved dance reality shows. The show is hosted by Arjun Bijlani and Madhuri Dixit-Nene, Shashank Khaitan and Tushar Kalia are the judges. Tonight (September 28, 2019) is the grand finale of this much competitive show. It is indeed going to be a grand affair as the dancing queen, our Dhak Dhak Girl would be putting up a fabulous performance. But who would be taking away the coveted title is something the audience is looking forward to. The winner’s name would be announced by everyone’s favourite, Salman Khan, reports BT. Yes, the handsome hunk will not only be announcing the winner’s name but would also be awarding the winner. The Sky Is Pink Promotions: Priyanka Chopra Jonas Poses With Dhak Dhak Girl Madhuri Dixit-Nene on the Sets of Dance Deewane 2 (View Pics).

Few pictures from the sets of Dance Deewane 2 have hit the internet and fans are eagerly looking to tonight’s episode. This episode is also special as global icon Priyanka Chopra Jonas would also be seen on the judge’s panel. Earlier this week we saw few pictures from the sets in which she was seen having some great time with the judges of the show. Priyanka and Madhuri Dixit-Nene would also be seen grooving to some of the popular tracks such as "Pinga Ga Pori Pinga" and "Dola Re", reports BT.

This is wat we all Madhurians expected. And, it finally came true. Thank you so much mam🙏🙏😍 #MadhuriDixit Dancing Queen for a reason. Look at the moves nd pose.😍😍🔥🔥💘💘 #DanceDeewane2 finale performance.

Everyone gonna fall for her again nd gonna die💘❤️😍 pic.twitter.com/ASgXXHffr5

Omm Mohapatra, Vishal Sonkar and Mehul Mehta are the finalists of Dance Deewane 2. From fans to judges, all are waiting to see who would be putting their best foot forward and bagging the title. The grand finale of Dance Deewane 2 would be aired on Colors at 9pm. Stay tuned for further updates!

(The above story first appeared on LatestLY on Sep 28, 2019 09:13 AM IST. For more news and updates on politics, world, sports, entertainment and lifestyle, log on to our website latestly.com).