DID L’il Masters 5: Akshay Kumar Shot for ‘Tip Tip Barsa Paani’ 28 Years Ago on the Same Set as of the ZEE TV Show 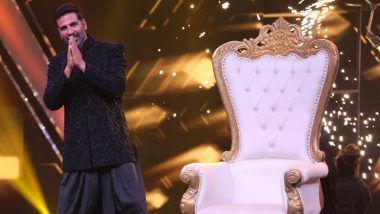 Bollywood star Akshay Kumar was left awestruck by DID L'il Masters 5 contestants Sadiya and Saumya's performance to Tip Tip Barsa Paani from his movie Mohra and recollected his old memories of shooting for this song 28 years back in the same studio. DID Li’l Masters 5: Akshay Kumar Reveals How He Has Done Almost 650 Songs in His Career of 30 Years.

Akshay is appearing on the show with Manushi Chillar to promote his film 'Samrat Prithviraj'. He was nostalgic watching the performance and went down memory lane, remembering the good old days. As Akshay mentioned: "I am feeling so nostalgic after watching this performance of Sadiya. I have shot this song on the same set and looking at you two perform on this has taken me on a trip down memory lane." Prithviraj Is Now Samrat Prithviraj: Akshay Kumar, Manushi Chhillar’s Period Drama Gets a New Title.

"She was also wearing the same yellow coloured dress, and you two have really performed so well." While Akshay Kumar was left nostalgic after Sadiya's performance, wait till you watch the stunning performances by the fantastic contestants of DID L'il Masters this weekend! DID L'il Masters airs on Zee TV.

(The above story first appeared on LatestLY on May 28, 2022 05:38 PM IST. For more news and updates on politics, world, sports, entertainment and lifestyle, log on to our website latestly.com).