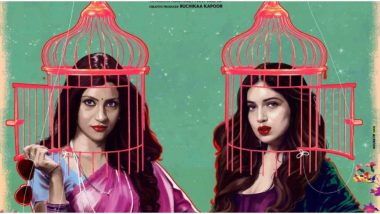 While online platforms are currently busy wooing the filmmakers to ink deal for their direct to web releases, Amazon Prime and Disney+ Hotstar have already marched ahead than their contemporaries. However, Netflix is apparently bucking up and preparing its meaty list meanwhile. While the OTT giant has already bagged Karan Johar's next production, Kargil Girl starring Janhvi Kapoor, there are reports that it has also managed to convince the makers of Dolly Kitty Aur Woh Chamakte Sitare to sign them as their digital release partner.  Dolly Kitty Aur Woh Chamakte Sitare First Look: Get Ready for Some ‘REBELution’ With Konkona Sen Sharma and Bhumi Pednekar.

While an official confirmation on the same is awaited, a source close to the project in its conversation with Lets OTT revealed the makers have finally sealed their deal with Netflix. The conversation to find its streaming partner was on for the longest of time and multiple digital partners like Hotstar, Amazon Prime and Netflix were eyeing to bag Konkona Sen Sharma's next but eventually, Netflix convinced them with the highest possible bid.

Amazon was very much interested in this Alankrita Shrivastava directorial considering her last project, Lipstick Under My Burkha had scored good viewer ratings on their platform. She has even directed Made in Heaven - a popular web series by Zoya Akhtar for Prime. However, Netflix probably offered them a deal better than the rest and hence the makers had no choice but to go for it. First INOX, Now PVR Disappointed With Films Going Directly to Streaming Platforms.

The movie is backed by Ekta Kapoor's Balaji Motion Pictures and stars Kubbra Sait along with Bhumi and Konkona. Meanwhile, Netflix is expected to announce its long list of upcoming shows and direct to web releases on July 16.

(The above story first appeared on LatestLY on Jul 14, 2020 06:29 PM IST. For more news and updates on politics, world, sports, entertainment and lifestyle, log on to our website latestly.com).