El Camino - A Breaking Bad Movie Trailer: Jesse Pinkman May be Scarred But He's Ready to Fight for His Life in This Chilling New Promo (Watch Video)

The trailer of El Camino: A Breaking Bad Movie is here and it looks incredible. Aaron Paul's Jesse Pinkman is back with emotional and physical scars but is not really broken. As the heavy past weighs on him, his redemption is going to be a tough ride. Watch the full trailer inside. 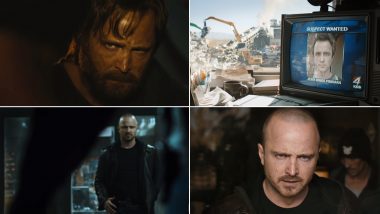 Here's another treat for the Breaking Bad fans. After a chilling teaser of the film was shared on Sunday, September 22, here's a new trailer of El Camino: A Breaking Bad Movie. The trailer offers an in-depth look at Jesse Pinkman (Aaron Paul) after the events of the series. As expected, it's quite dark and things are about to get worse than we expected. The trailer shows us what sort of trials Jesse is about to face after the series finale. El Camino - A Breaking Bad Movie New Trailer: Jesse Pinkman's Bitchin' Return Will Get You High on Nostalgia and Excitement (Watch Video).

The former meth cook is on the run, he's physically and mentally scarred and we see him turning up at Skinny Pete's house who is shocked to find Jesse at his door. There's also snippets of flashback in the trailer. One of the most gut-wrenching moments though is definitely the one where we see a photo of Andrea and Brock hanging in the car that Jesse is driving. The trailer has only one dialogue where we hear Jesse saying "Yeah" to an unknown voiceover asking him if h's ready.

The trailer promises that the film in full-on Breaking Bad style is going to consist of violence. The scenic desert visuals take us back to the epic series. Jesse's path to redemption is not going to be an easy one and from the trailer, it sure looks like Paul has packed an amazing performance. El Camino: A Breaking Bad Movie: Jesse Pinkman's Tragic Backstory Gets a Soothing Touch in Chloe X Halle's Enchanted (Watch Video).

Ever since its announcement, fans of the series have been super excited for the film. Jesse's fate will son unfold with El Camino: A Breaking Bad Movie as it releases on Netflix and in some theatres on October 11.

(The above story first appeared on LatestLY on Sep 24, 2019 09:20 PM IST. For more news and updates on politics, world, sports, entertainment and lifestyle, log on to our website latestly.com).