What India loves to watch the most on Netflix says a lot about us. In the last year and a half, every movie or series which had sexually charged content secured the number 1 position on the streamer's Top 10 list. We talked about five of them here... 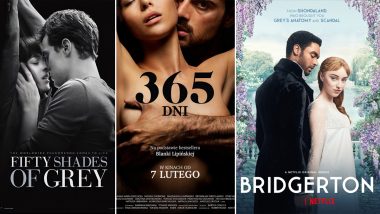 India's binge habits are highly predictable. Netflix's Top 10 list exposes it nearly every time. We still remember how the Polish erotic romantic drama 365 Days was in the number 1 position for several weeks. Every other content that has some or the other sexually charge flavour finds many takers on Netflix. This shouldn't come as a huge shocker for us because India is a country that invented the genre of Horrex (Horror and Sex) that is yet to fail at the box office. Our erotic-thrillers earn a lot of money for their producers so in a time when theatres are closed, these shows have come as a respite for the audience, it seems. Singer Duffy Demands Netflix to Take Down ‘365 Days’, Says the Polish Film Normalises Kidnapping and Rape

What's even more interesting is that each of these sexually charged shows either debuts on Number 1 or reach the top within days of hitting the streamer. Let us tell you five of these most-watched shows

It's still unknown if Indians explored Sexify because of its unusual and unique content about an inexperienced student's drive to understand intimacy to develop an app. But it sure debuted on Number 1 on Netflix.

Shonda Rhimes's series is an unofficial victorian take on Gossip Girl but it got a lot of attention for the number of intimate scenes between the lead characters. Quite obviously, the series was on top for several weeks. Bridgerton Season 2: Phoebe Dynevor Opens Up About the Plot of Her Upcoming Netflix Show

Dark Desire is about a married woman who indulges in a weekend of passion but things go horribly wrong. Analysis proved that the Dark Desire had higher demand than 97.4% of all drama titles in India. So it came as no surprise that the series was in the number 1 spot for several weeks.

(The above story first appeared on LatestLY on May 23, 2021 07:19 PM IST. For more news and updates on politics, world, sports, entertainment and lifestyle, log on to our website latestly.com).