Sonam, who is currently in the midst of the storm that Sushant Singh Rajpupt's untimely death has stirred, dug a grave for herself when she tweeted and acknowledged that she was 'privileged' to be Anil Kapoor's daughter and that privilege was a result of her good 'karma'. 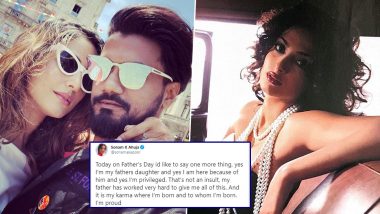 That Rocky Jaiswal does not mince words when speaking, is something that he projected very well when his girlfriend, actress Hina Khan was in Bigg Boss 11. Rocky defended Hina like there was no tomorrow. And he definitely did not mince words when he called out Sonam Kapoor for her Father's Day tweet.

Sonam, who is currently in the midst of the storm that Sushant Singh Rajpupt's untimely death has stirred, dug a grave for herself when she tweeted and acknowledged that she was 'privileged' to be Anil Kapoor's daughter and that privilege was a result of her good 'karma'. Father's Day 2020: Ajay Devgn, Sonam Kapoor, Madhuri Dixit and Other Bollywood Celebs Share Wonderful Memories Of Their Dads!.

And Twitter did not take too soon to start schooling Sonam, who has often been labelled as the poster child for nepotism, just like other of her contemporaries. Sonam Kapoor Disables the Comments Section on her Instagram Account after Nepotism Debate Gains Momentum on Social Media.

Check Out Sonam Kapoor's Tweet That Ruffled Tweeple Below:

Today on Father’s Day id like to say one more thing, yes I’m my fathers daughter and yes I am here because of him and yes I’m privileged. That’s not an insult, my father has worked very hard to give me all of this. And it is my karma where I’m born and to whom I’m born. I’m proud

And joining in the tirade was Hina Khan's beau Rocky Jaiswal. Not having taken kindly to Sonam Kapoor's tweet, Rocky tweeted to her, 'I can't begin to imagine your next life,' but he also added that his tweet was with 'utmost respect' to her. Hina Khan and Rocky Jaiswal Paint the Town Red With Their Oh-So-Romantic Mirror Selfies (View Pics).

So, every individual who’s been denied d opportunity they deserved bcoz of #Privileges n #Nepotism deserved it for their ‘Karma’ in thr past life?

By that logic, I can’t begin to imagine ur next life @sonamakapoor !

Respectfully M’am, I expected better frm U given ur fathers BG https://t.co/KBJfRjXc9T

In another tweet, Rocky went on to lash out at the actress for undermining those who have been denied their dues because of nepotism.

Btw this western version of a sacred cosmic balance is d reason why d poor r left in this country on d roads by d rich, privileged n powerful. Justifying cruelty in d name of ‘Karma’ by d high, mighty n powerful.Thumbs up for accepting ur reality n respect ur opinion otherwise!✌🏽

Twitterati was harsher with the actress and called her out for her 'narrow' mindset. Sonam, along with the likes of Sonakshi Sinha and Alia Bhatt among other star kids has been receiving lots of hate ever since Kangana Ranaut, in a video, blamed nepotism for loss of opportunities to industry outsiders like Sushant Singh Rajput. The actor's unfortunate death rehashed the nepotism debate once again in the industry which led to Karan Johar (known as the father of nepotism) unfollowing a huge number of industry folk, Alia Bhatt losing social media followers, Sonam Kapoor disabling comments on Instagram and Sonakshi Sinha deactivating her Twitter account.

(The above story first appeared on LatestLY on Jun 22, 2020 04:49 PM IST. For more news and updates on politics, world, sports, entertainment and lifestyle, log on to our website latestly.com).