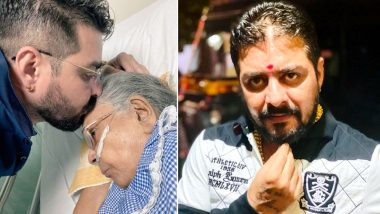 Hindustani Bhau, who was known to make controversial statements during his stint in Bigg Boss 13, had revealed (post his eviction) how he had missed his mother during his stay in the house. He had told Times Now, “I got evicted because I wanted to leave. I had been missing my mother terribly and I am not used to staying away from her for such a long time. I am her son but I take care of her like she is my daughter. And I knew that she would be worried because I was not well in the house. Otherwise, there is no chance that I got lesser votes than the others.” Bigg Boss 13's Hindustani Bhau Files a Police Complaint Against Ekta Kapoor For Allegedly Defaming Army Uniform In ALTBalaji's XXX Uncensored Season 2.

Hindustani Bhau shares the news as he loses his mother last night. May her soul #RIP🙏 . . #hindustanibhau

In July 2020, Hindustani Bhau had filed a criminal complaint against Ekta Kapoor for disrespecting Indian army uniform in one of her web series. Hindustani Bhau’s lawyer shared that he was supposed to appear at the court today in relation to this case. However, that could not happen owing to the sudden demise of his mother.

(The above story first appeared on LatestLY on Oct 27, 2020 11:18 AM IST. For more news and updates on politics, world, sports, entertainment and lifestyle, log on to our website latestly.com).