Ishqbaaz January 16, 2019 Written Update Full Episode: Shivaansh Manages to Win Over Angad’s Family and Convinces Them to Go Ahead with Shivani’s Marriage

Today’s episode of Ishqbaaz starts with SSO (Nakul Mehta) asking Sharda if everything is ready, she says yes. 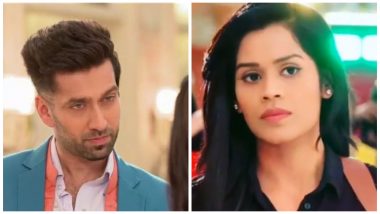 Today’s episode of Ishqbaaz starts with SSO (Nakul Mehta) asking Sharda if everything is ready, she says yes. PD comes and ask SSO why are the Ahuja’s coming again. SSO tells her that he had promised he will make everything proper. Just then Dhruv comes and tells that the Ahuja’s have come. PN and PD greet them and tell them to come in. Sudha tells that she did not want to come here again but only because of Angad they are back here. Sudha tells Angad told me that SSO wants to talk to me, and tells finally SSO has agreed that he is in fault. Sudha tells PD if SSO apologizes today she will agree for this marriage. SSO tells first let us eat something and then talk about this.

Sharda comes in a room and takes napkins from the cupboard and sees a watch lying in the table and thinks maybe it is SSO’s and keeps it inside the cupboard. Just then someone comes behind her and tries to hit her, but Aasya comes and tells Sharda that SSO is waiting for her and tells her to go down. Down in the breakfast table, Dhruv sneezes and Sudha drops her soup bowl. Sudha tells by accident it fell SSO tells that accidents happen but we should not blame the person with whom it happens as it is their destiny. Sudha tells SSO to clearly tell what he wants to tell. SSO tells that Radhika had also met with an accident long back and she lost her one eye then. Everyone blames her but it is not her fault even Shivani’s marriage was going to cancel because of Radhika eye problem. Sudha tells she cannot believe how this family is and says she came here as she thought SSO realizes his mistake. Sudha gets furious and tells Angad for showing this all he had brought her here. Sudha tells they should leave from here.

Aasya picks up a napkin which Sharda has dropped and suddenly feels there is someone. Aasya sees a bride with a mask and gets frightened. PD and PN try to make Sudha understand that she should not go like this and sit and talk and sought out this problem. SSO tells that guest should not go without eating anything and tells Radhika to get some sweets for Sudha. SSO tells Radhika to get other sweets for the Ahuja’s as this is not sugar-free. SSO tells that he knows that Sudha and Mr. Ahuja has diabetes and Mrs. Ahuja has arthritis, and do they have any guarantee that Angad might not get diabetics or arthritis in future. SSO tells what if in future Shivani and Angad’s children get it. SSO tells that they are the one who should call off this marriage as they also have to think about their daughter. SSO tells that in future if Shivani meets with an accident will Angad leave her and go. SSO tells if Angad is like that who will leave his life partner in crises then SSO does not want like this life partner for his sister. Sudha tells Angad that he wants to marry in this family and gets angry and goes from there.

PN and PD tell SSO to stop Sudha from going. Sudha sees that Angad has stopped and is not coming with her. Angad says he and Shivani are not at fault, why should we get punished and says sorry he won’t listen to her as he loves Shivani. Angad tells if he ever marry, it will be only Shivani. Sudha says that she is doing this for his happiness. Shivaansh says no, you should have asked Angad what he wants, you have just seen Radhika’s flaw, not her qualities, she is just perfect, she lacks nothing, she completes our family. He hugs Radhika, Dhruv and Shivani. Angad tells Sudha you said marriage is a bond between two families, where can we get such a family, where a brother doesn’t discriminate between cousin and own sister, where relations are seen. Angad tells he wants to become a part of this family and hugs Shivani. Sudha looks on. Shivaansh says he is sorry, if he has crossed any limit, he would like to apologize. Sudha realizes her mistake and says no, you have done right, sometimes elders get stubborn like kids, you have shown much maturity, you protected the respect of your sisters. Sudha tells SSO sorry. Radhika doesn’t lack anything and thinks she is the luckiest sister to have a brother like him, person is defined by his relations, Shivani will be special too to get support from you and Angad. She apologizes to Nani and Dadi. She hugs Dadi and asks her to save tears for Shivani’s bidaai. She says after all this drama, she is feeling hungry, do they really have sugar free sweets. Sudha feeds sweets to everyone. They all smile. Dhruv does Shayari. Nani pats him. Shivaansh comes and greets them. Khanna says Vajpayee has come. Nani asks why did you call the lawyer. Shivaansh looks on.

In the precap, Aditi sees the room again and thinks something is missing and thinks she will find out what is going out in this house.

(The above story first appeared on LatestLY on Jan 16, 2019 11:29 PM IST. For more news and updates on politics, world, sports, entertainment and lifestyle, log on to our website latestly.com).