Jasmin Bhasin On Aly Goni Link Up Rumours: ‘Earlier, I Would Laugh Them Off But Now, They Have Started To Affect Me’

it’s been two years, that rumours of Jasmin Bhasin dating Aly Goni have been going on and still continue. Earlier not bothered by them, Jasmin now seems to be affected. 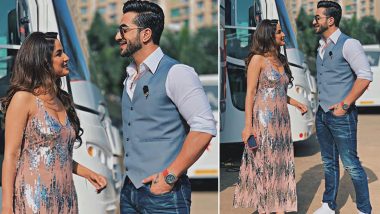 Actors Aly Goni and Jasmin Bhasin hit it off when they met on the sets of Khatron Ke Khiladi Season 9 and there was no turning back for them. They quickly became besties and their comfortable camaraderie gave rise to rumours of a relationship between them. Currently, the duo is seen entertaining one and all in Khatron Ke Khiladi: Made In India. And it’s been two years, that the rumours still continue and haven’t stopped. Earlier not perturbed by them, Jasmin now seems to be bothered. Khatron Ke Khiladi 9: Jasmin Bhasin Addresses Link-Up Rumours With Punit J Pathak, Asks Fans To Not Link Her Up and Make Her 'Uncomfortable' With Her Male Pals.

“I have always maintained that Aly and I are best of friends, I am not in a relationship with him. For the past two years, I am being called his girlfriend. Earlier, I would laugh off these rumours, but now, they have started to affect me. When I am linked with close friends, it affects my friendship with them, and that’s upsetting,” revealed Jasmin to Bombay Times. Aly Goni Rubbishes Rumours of Dating Naagin 4 Actress Jasmin Bhasin (Details Inside).

In an interview in 2019, Jasmin had stated that she was not bothered by what everyone said. In that interview Jasmin had revealed, "These rumours won’t affect our equation, and I don’t pay heed to them. I am not someone who will hide my relationship." But looks like that has clearly changed. Affected by the rumours now, Jasmin went on to tell the daily, “These rumours are affecting my personal life. I am looking for certain qualities in my ideal partner and Aly doesn’t meet those criteria for sure.”

Wanting to keep all the attention on her professional life rather than personal, Jasmin went on to add, “I am an independent girl, who is working hard to create an identity for myself and I don’t want to be known just as someone’s girlfriend. We talk about women empowerment, but why is it that instead of appreciating a woman for her work and recognising all her sacrifices and struggles, all we do is tag her as someone’s girlfriend? I request people to actually empower and respect women, and not just talk about it,” concludes Jasmin.

(The above story first appeared on LatestLY on Aug 19, 2020 09:06 AM IST. For more news and updates on politics, world, sports, entertainment and lifestyle, log on to our website latestly.com).