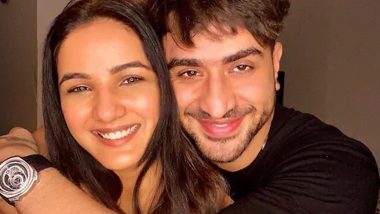 Rumours of Yeh Hai Mohabbatein actor Aly Goni and Naagin 4 actress Jasmin Bhasin in a relationship has been doing rounds from quite a long time. Although the two have denied such speculations and made it clear that they are just friends, still a lot has been written and spoken about their camaraderie. The interesting part is that the two will be soon seen together in Khatron Ke Khiladi: Made In India pulling off some dangerous stunts. In a recent interview with ETimes TV, Aly opened up and expressed that Jasmin is his best friend. Khatron Ke Khiladi 9: Jasmin Bhasin Addresses Link Up Rumours With Punit J Pathak, Asks Fans To Not Link Her Up and Make Her 'Uncomfortable' With Her Male Pals.

When the portal quizzed him if the gossip affects their dosti, he answered, "It doesn't affect our friendship. She is my best friend. People will keep saying what they want to and we can't control it. I think once she has someone in her life, a boyfriend, or I have a girlfriend in my life, only then will this stop coming in the media. I am waiting for my special someone who would walk into my life, my perfect partner. I just hope when that happens these rumours will stop."

Not just this, he also talked about working with Bhasin on  KKK: Made In India, "Jasmin is a dear and it is amazing to work with her and be with her on sets. I think the joy you get by working with friends can't be compared with when we are working with people we don't know. It is amazing and I have a lot of fun working with her," he added. Khatron Ke Khiladi Special Edition: Hina Khan Opts Out Due To 'Safety Reasons', Sidharth Shukla Was Never Approached (Deets Inside).

It was via Star Plus' hit show Yeh Hai Mohabbatein that Aly became a popular name whereas Jasmin was recognised after she was seen in Dil Se Dil Tak opposite Sidharth Shukla. The two ahead met on Khatron Ke Khiladi and connected quite well. Stay tuned!

(The above story first appeared on LatestLY on Jul 31, 2020 07:25 PM IST. For more news and updates on politics, world, sports, entertainment and lifestyle, log on to our website latestly.com).