Khatron Ke Khiladi 9: Jasmin Bhasin Addresses Link Up Rumours With Punit J Pathak, Asks Fans To Not Link Her Up and Make Her 'Uncomfortable' With Her Male Pals 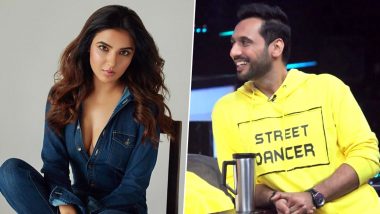 Actress Jasmin Bhasin has recently been in the news for reasons that haven't been that pleasant. First, the actress moved out of her show Dil Toh Happy Hai Ji and then she bagged Naagin 4. However, her stint in Ekta Kapoor's supernatural show did not pan out like she and a lot of the actress' fans had expected to. Jasmin's character Nayantara was ended abruptly and the actress, after an amicable discussion with the production house, decided not to wait and moved on. And as we all know, Rashami Desai bagged the role of Nayantara who has returned to the show's plot with a fake identity of Shalaka. Naagin 4: After Jasmin Bhasin, Sayantani Ghosh’s Character To End On Ekta Kapoor's Supernatural Thriller Soon.

Moving on from the Tashan-e-Ishq beauty's professional life, Jasmin has incessantly been in the news for her link up with Khatron Ke Khiladi 9 co-contestant Aly Goni. However, both Jasmin and Aly have always denied these rumours. And while it can be recalled that almost everyone in the KKK9 crew had a whale of a time on the show, fans particularly liked Jasmin's pairing with winner Punit J Pathak as well. Khatron Ke Khiladi 9 Winner Punit J Pathak Is An Ace Dancer; Here's All You Need To Know About Him and his 10-Year-Long Career!.

And in a recent live session with an online portal, a fan even asked Jasmin upfront about her chemistry with Punit J Pathak. A user commented on the Pinkvilla live session and asked the actress about her relationship with Punit. To this, Jasmin revealed, "Listen, guys, thank you for so much love that every male friend you see and pair me up with. Punit and I look good with each other, but the fact is that I look good with everyone. I am young and I am single."

She went on to reveal, "You can pair me up with anybody but that's not a nice thing to do. I should also be comfortable to make male friends. When I will date someone, and we become a couple, I will let you all know about it. But, stop making uncomfortable with my male pals. Please spare me. They are all my friends." Well, Jasmin has set the record straight now!

(The above story first appeared on LatestLY on Apr 02, 2020 04:23 PM IST. For more news and updates on politics, world, sports, entertainment and lifestyle, log on to our website latestly.com).