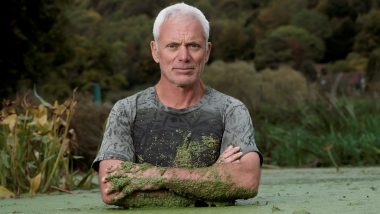 "Jeremy Wade's Dark Waters" host Jeremy Wade credits his first trip to India to the desire to start his TV career, and says the visit put him on a journey of exploration and adventure through his shows. He is a biologist, author and television host. After spending over 12 year in front of the screen, Wade has become a familiar name among wildlife television buffs. "My first trip outside Europe was to India, and that was in 1982. My destination then was... I got the cheapest price and travelled to the Corbett park... Back then it was possible to fish there. So, fishing there was a real revelation for me," Wade told IANS. Killing Eve Actress Sandra Oh Feels UK Film and TV Industry is Way ‘Behind’ in Terms of Diversity.

"When I got home, I wrote a couple of articles about my experiences. That was the thing that set me on the course to where I am today. After travelling to India and catching fish there, I realised that maybe there's other parts of the world where there are interesting fishes on which I could write about. Then for about 20 years, I was travelling to different places. Normally, one expedition for a year and I started to see things that I realised that I hadn't seen on TV," he added. Did You Know Money Heist’s Nairobi aka Alba Flores Donned a Saree and Spoke in Telugu For a TV Film? (Watch Video)

The television host continued: "My first TV work was a series I did in 2002. But then things were quiet again. The thing that really kicked things off was returning to India. So in 2008, I came back to India and made a program for Animal Planet. The show was looking into stories in the mountains and rivers in North India. There were stories of something very big that had been rumoured to grab a couple of people, which could be something in the water. And it turns out that there was a massive catfish that lived in some of these waters. They used to be numerous, but now, they are pretty rare."

He also caught one of the species which was "about the same size as me". "This program that I filmed was originally going to be just one program that was it. But the impact of that program was so great on everybody, and the questions started coming out. Are there more stories like this around the world? We started digging in other places, and here I am 11-12 years later, still making TV programs. The program that really kicked it off was filmed in North India." At the moment, Wade will be seen in "Jeremy Wade's Dark Waters", which will premiere in India on July 6 on Animal Planet and Discovery Plus app.

(The above story first appeared on LatestLY on Jul 01, 2020 12:35 PM IST. For more news and updates on politics, world, sports, entertainment and lifestyle, log on to our website latestly.com).