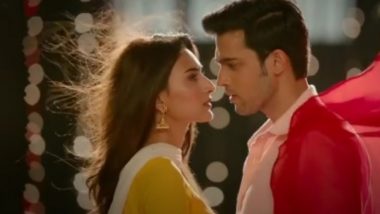 The cast and crew have already started shooting for the show. Pictures of Erica, Parth and Puja Banerjee from the sets of Kasautii Zindagii Kay 2 went viral on the internet. Hina Khan will be playing the role of Komolika in the show but Ekta has been giving fans a hell of a time making them wonder if it's actually Krystle D'Souza who will play the iconic role. There were also speculations that Barun Sobti will be playing the role of Mr. Bajaj in the show. As per reports, Hina will start shooting for Kasautii Zindagii Kay 2 October 2018 onward.

Check out the new promo and the first look of the new-age Prerna-Anurag right here.

ANURAG N PRERNA ..!they were so different no one cud imagine them with each other not even them themselves... destiny laughed fate smiled and said ‘ u both will always b with each other ....no not LIVE with each other but LIVE FOR each other! Introducing Anurag PLAYED BY @the_parthsamthaan n Prerna PLAYED BY @iam_ejf two karmically connected lovers ...introduced by the KING OF ROMANCE @iamsrk #kasautizindagiki #mugshot #mugshotlove #anurag #prerna

Brings back old memories, doesn't it? We specially love that fact that Shah Rukh Khan was a part of this promo. We totally love the new looks of the main leads. Kasautii Zindagii Kay 2 goes on air from 25th September 2018. Ekta recently shared a glimpse of the show with Shah Rukh Khan, who will be narrating the first couple of episodes. What are your thoughts on the promo? Tell us in the comments below and stay tuned with us for more.

(The above story first appeared on LatestLY on Sep 02, 2018 03:22 PM IST. For more news and updates on politics, world, sports, entertainment and lifestyle, log on to our website latestly.com).