Amitabh Bachchan hosted Sony TV quiz show Kaun Banega Crorepati 13 is all set to return to your television screens. Here's when and where you can watch KBC 13. Read on! 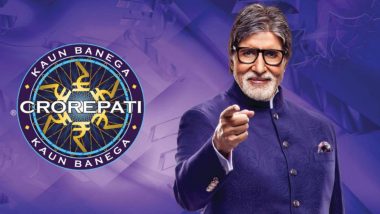 Amitabh Bachchan hosted Indian quiz show, Kaun Banega Crorepati is returning with its thirteenth season. Yes, fans of the show will once again meet Big B via their television sets. Having said that, due to the COVID-19 virus still in the air, the makers have introduced a few changes this time, however, the concept will be the same. KBC is among the most popular shows in India where a person can win in crores by sitting in front of the legendary actor on the hot seat. Just in case, you are the one who is excited about the show, here are all the details about when and where you can watch Kaun Banega Crorepati Season 13. Kaun Banega Crorepati 13: Amitabh Bachchan Shares KBC’s New Promo; Popular Quiz Show Coming Soon (Watch Video).

Kaun Banega Crorepati 13 was announced long back. This Amitabh Bachchan's show will be airing from Monday to Friday at 9 pm from August 23. So, are you excited about the same? We bet you are!

Where to Watch KBC 13

KBC 13 will premiere on Sony TV today (August 23). Also, if you do not have a TV, you can also watch the show on SonyLIV and JioTV app. Interesting, right?  Kaun Banega Crorepati 13 Registrations Open on May 10: Here’s How You Can Register for Amitabh Bachchan’s Quiz Show!

This time, KBC has quite an impactful theme. As it is taglined ‘Jawaab Aap Hi Ho’ and will celebrate every individual and their right to ‘gyaan, dhyaan and samman’.

While the overall essence of the show remains the same. This time Fastest-Finger-Fast will be called Fastest Finger First Triple Test. Earlier, contestants used to answer one question to reach the hot seat, but this time they have to answer three questions correctly in the shortest time to sit in front of Amitabh Bachchan. Also, the audience poll is also making a comeback. Stay tuned!

(The above story first appeared on LatestLY on Aug 23, 2021 08:15 PM IST. For more news and updates on politics, world, sports, entertainment and lifestyle, log on to our website latestly.com).