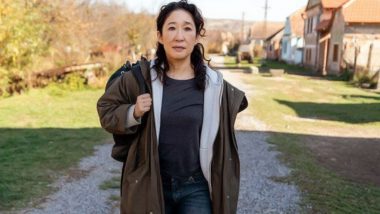 Actor Sandra Oh has said the UK is "behind" in terms of diversity on film and TV sets. The Canadian-American actor, who stars in the hit BBC series "Killing Eve", explained how sometimes she is the only Asian person on a set when shooting in the country. "The UK, I'm not afraid to say, is behind. I'm not only the only Asian person on set - sometimes it changes, (it's) very exciting when that does, someone comes on set. "But the development of people behind the camera is very slow in the UK. I don't know about the rest of Europe. Sometimes it would be me and 75 white people and I have not come from that," Oh said while in conversation with fellow actor Kerry Washington for Variety's 'Actors on Actors' series. Anthony Mackie Criticises Marvel Studios Over Hiring Practices, Says ‘People Should Be Cast on the Basis of Their Calibre and Not Gender or Color Biases’

The BAFTA-nominated actor said the US fairs slightly better, where she has worked with women and women of colour. "I have not come from that in my film career, which has been much more independent, mostly working with women and women of colour. "And my relationship with television - and in the United States - hasn't necessarily been all white," Oh, who shot to international acclaim as Dr Christina Yang in Shonda Rhimes' long-running medical drama "Grey's Anatomy". Academy Awards Expand Their Best Picture Category to 10 Nominees, Unveil New Guidelines for Diversity and Inclusion

Her comments follow similar remarks by British director Steve McQueen, who recently claimed the UK is "far behind" the US in representing its black, Asian and minority ethnic (BAME) population. Earlier this month, the BBC pledged 100 million pounds of its existing commissioning budget over three years towards "diverse and inclusive content" in an attempt to accelerate the pace of change in increasing diversity both in front and behind the camera.