The first full-fledged trailer for the upcoming Zee5 film, Lahore Confidential, has released. The movie, directed by Kunal Kohli stars Richa Chadha and Arunoday Singh in lead roles, while Karishma Tanna appears in a key role. Lahore Confidential releases on Zee5 on December 11. 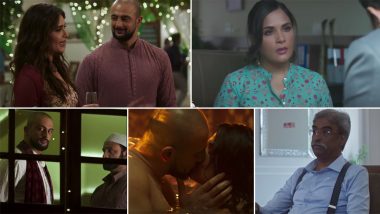 The first full-fledged trailer for the upcoming Zee5 film, Lahore Confidential, has released. The movie, directed by Kunal Kohli stars Richa Chadha and Arunoday Singh in lead roles, while Karishma Tanna appears in a key role. The cross-border love story with a whiff of Ek Tha Tiger looks intriguing. Richa plays a humble, divorced Indian woman who, amidst her mundane-routine life and her love for Urdu literature, finds herself on an intelligence duty in Pakistan. Well, there's a wee bit of Raazi there as well. Lahore Confidential Teaser: Richa Chadha, Karishma Tanna, Arunoday Singh Lead A Cross-Border Romance (Watch Video).

“Lahore Confidential brings the genre of spy and romantic thriller in a way that will keep the viewers hooked to the plot. My favourite part of the film is the old school romance banter mixed with its espionage," Richa has said about the film.

Arunoday Singh looks charming as always. He plays a mysterious character, who might be the antagonist of the story, but his poetic charm will be tough to ignore. "Poetry has always been close to my heart, which makes the film even more special for me. It’s is going to be a never seen before romantic spy thriller," the actor has said about his character. He also promised that the narrative will challenge the viewer. Lahore Confidential: Kunal Kohli Assures Richa Chadha’s Zee5 Film Has Entertaining Elements Right from Old School Romance to Graceful Urdu Poetry.

At the helm of Lahore Confidential is director Kunal Kohli. He has made one of India's favourite romcoms, Hum Tum, and the cross border love story, Fanaa, which, too was peppered with espionage.

There are a few bold scenes in the trailer itself. Karishma has said, "My character has a lot of layers to it which will be interesting for the viewers. They can expect a surprise or two."

(The above story first appeared on LatestLY on Nov 19, 2020 04:44 PM IST. For more news and updates on politics, world, sports, entertainment and lifestyle, log on to our website latestly.com).