Ektaa R. Kapoor's fearless reality show Lock Upp wrapped up on Saturday. After a grand finale in which Munawar Faruqui was announced as the winner with a success party 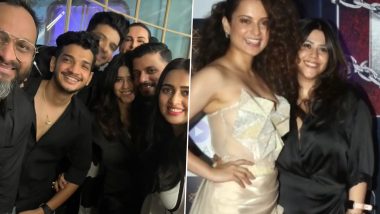 Ektaa R. Kapoor's fearless reality show Lock Upp wrapped up on Saturday. After a grand finale in which Munawar Faruqui was announced as the winner with a success party, Ektaa took to Instagram to express gratitude to Bollywood star and host Kangana Ranaut and her friend Ridhi Dogra. Ektaa shared a reel featuring highlights of the show, BTS moments and also pictures from the success party. She praised Karan Kundrra and others as well for their contribution towards the show. Lock Upp Season 1 Winner: Munawar Faruqui Wins Kangana Ranaut’s Reality Show; Netizens Congratulate The Comedian On Twitter (View Pics).

"Gratitude! N Thanku @kanganaranaut for Supporting an indian concept n n homegrown apps for ur launch n doing a fantastic job! @mxplayer for supporting d vision n backing it n @endemolshineind doing such a fab job !" "Team @altbalaji for making this concept SAGAR N @rehan_sayyed3 ! @zulfizak @simplyd_com for making this happen ! Varun n @spicepr for d fab Marketting n pr ! @kkundrra for the understanding of d jailor wothout an international format to Learn from!," she wrote. Kangana Ranaut on Lock Upp: Debuting into Hosting With Ekta Kapoor’s Reality Show Has Been in Itself a Huge Success.

She further added conveying her thanks to her friend Ridhi, for the concept of jail. "Thanks @iridhidogra for the idea of a jail when I wanted to b different ind reality space! N @mansii.shrivastav @karanbedi07 for always listening n strategising," she added. She concluded by saying: "Thanku d 20 contestants d on line offline teams u were d life of the show. Thanku audiences, Thanku universe #lockupp, Thanku GOD. JAI MATA DI."

Check Out Ektaa Kapoor's Reel Below:

Ektaa mentioned Ridhi for giving her the idea of 'Lock Upp' as it came after an FIR was filed against her and her production house for copying the concept. Hyderabad-based Sanober Baig, managing director of Prime Media had been fighting a legal battle with the makers of the show as he alleged plagiarism for copying his concept of 'Jail'.

(The above story first appeared on LatestLY on May 11, 2022 02:18 PM IST. For more news and updates on politics, world, sports, entertainment and lifestyle, log on to our website latestly.com).