Mirzapur 2 is currently streaming on Amazon Prime Videos and fans of the show are going gaga over it. However, looks like trouble has already begun for the makers as an author has accused the makers of maligning his image. Read on. 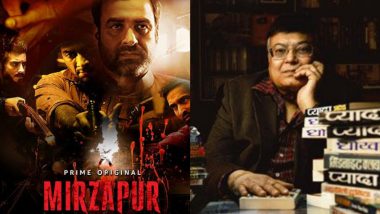 Mirzapur 2 is currently streaming on Amazon Prime Videos and fans of the show are going gaga over it. However, looks like the second season of the hit web-show that stars prominent faces like Pankaj Tripathi, Ali Fazal, Divyendu Sharma, Shweta Tripathi, Rasika Dugal and more is in hot waters. As recently, famous Hindi crime fiction author Surender Mohan Pathak has accused the makers of Mirzapur 2 for misinterpreting his book 'Dhabba' in the minds of the audience. The author took to Twitter and has posted a letter that highlights what has gone wrong. Mirzapur 2 Full Episodes in HD Leaked on Telegram Channels & TamilRockers Links for Free Download and Watch Online; Ali Fazal’s Amazon Prime Video Web Series Faces Piracy Threat?

For the uninitiated, the above-mentioned sequence in Mirzapur 2 appears in episode 3 where Satyandand Tripathi (Kulbhushan Kharbanda) reads an excerpt from Surender Mohan Pathak’s novel ‘Dhabba’. Well, now we wait for a reply from the makers. Stay tuned!

(The above story first appeared on LatestLY on Oct 29, 2020 02:53 PM IST. For more news and updates on politics, world, sports, entertainment and lifestyle, log on to our website latestly.com).