Nitish Bharadwaj Birthday Special: Here’s How the Actor Got Finalised To Play Lord Krishna in Mahabharat!

Nitish Bharadwaj celebrates his birthday today (June 2). And so on this day, let us take a look at how the actor was selected for the role of Lord Krishna on BR Chopra's Mahabharat. Read on. 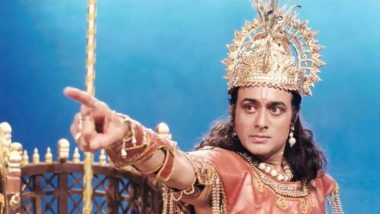 Actor Nitish Bharadwaj needs no introduction. His iconic role on Indian TV as Lord Krishna in BR Chopra's Mahabharat is indeed one of his greatest works. The love he received for playing Krishna in the mythological show was immense. Right from his costume as the almighty to the acting prowess, fans still can't get enough of the charm he brought as Krishna on screen. However, do you know how the actor was finalised to play the god in Mahabharat? Well, on the occasion of Nitish's birthday today (June 2), let's take a look at how Bharadwaj became Krishna. Nitish Bharadwaj, Mahabharat's Krishna, Defends Sonakshi Sinha From Mukesh Khanna's Jibe On Her Ignorance of Ramayan!

So, earlier Nitish was cast in the role of Vidur in Mahabharat, but destiny had other plans. In an old interview with SpotboyE, the actor had said, "I was cast for the role of Vidur earlier, but suddenly someone else was given the role of Vidur in my place. I knew Ravi, and we also did films together. When I went and asked Ravi, he said that you are now 23-24 years old and Vidur will get old after a few episodes. It won’t suit you."

Later, when Nitish was offered the role of Nakula on the show, he denied it. "After some time I got an offer again. I was being cast as Nakula in the show. I refused to do that. I wanted to play Abhimanyu, I told Ravi then he said that he will think." Nitish Bharadwaj Reacts on Being Called 'Diplomatic' By Mukesh Khanna, Says 'It Helps In Not Hurting People Unnecessarily'.

Finally, the moment came in when he got a call from the makers to play Krishna, but Nitish was not keen on the role. However, it was after the screen test, he got finalised. He added, "After some time I was called for a screen test of Krishna’s role but I refused. I told him that for the role of Krishna you need an experienced human being. How can you give the role of a great man to a new person? So he told me that you wanted to do a good role once you do a screen test. Just then did I give a screen test and it was final.”

And that is how Nitish was cast as the first-ever Krishna on the small screen that made him an overnight star. As they say, what's written, shall happen and Nitish's casting for the role of Krishna is the best example of the same. Happy Birthday, Nitish Bharadwaj. Stay tuned!

(The above story first appeared on LatestLY on Jun 02, 2021 08:40 AM IST. For more news and updates on politics, world, sports, entertainment and lifestyle, log on to our website latestly.com).