Parth Samthaan, Pooja Banerjee, Kamya Punjabi – Take a Look at the TV Newsmakers of the Week

From Kamya Punjabi tying the knot with Delhi-based businessman Shalabh Dang next year, Parth Samthaan romancing Sonal Chauhan in his upcoming ALTBalaji series, to Pankhuri Awasthy making her Bollywood debut with Ayushmann Khurrana starrer Shubh Mangal Zyada Saavdhan and Pooja Banerjee getting injured on the sets and opting out of Salman Khan’s Nach Baliye 9, here is a round-up of TV newsmakers! 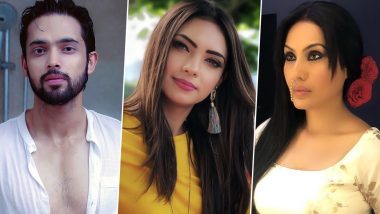 Take a look at the TV newsmakers of the week! (Photo Credits: File Photo)

With another Sunday upon us, it's time that we take a look at the top five news of the week! Telly industry has witnessed a lot of high-voltage drama this week. While a lot has been happening in the telly land, let's take you through the five things that you can’t afford to have missed this week. From Kamya Punjabi tying the knot with Delhi-based businessman Shalabh Dang next year, Parth Samthaan romancing Sonal Chauhan in his upcoming ALTBalaji series, to Pankhuri Awasthy making her Bollywood debut with Ayushmann Khurrana starrer Shubh Mangal Zyada Saavdhan and Pooja Banerjee getting injured on the sets and opting out of Salman Khan’s Nach Baliye 9, here is a round-up of TV newsmakers! Amit Tandon, Anita Hassanandani, Faisal Khan – Take a Look at the TV Newsmakers of the Week

Actress Kamya Punjabi, who is currently seen on Shakti — Astitva Ke Ehsaas Ki, is all set to tie the knot for the second time. The actress, who was earlier married to businessman Bunty Negi but got divorced in 2013, has found love once again. As per reports, Kamya is all set to exchange nuptial vows with Delhi-based Shalabh Dang, who works in the healthcare industry. Reportedly, Dang, who met Kamya in February this year, proposed to Kamya for marriage after dating for a couple of months.

Parth Samthaan will soon be seen in Ekta Kapoor's ALTBalaji digital series, where he will be seen playing the role of a gangster. The latest update on his digital debut is that Parth will be paired opposite actress Sonal Chauhan. Yes, Sonal Chauhan, who became popular for her role in Emraan Hashmi's Jannat, has been roped in to play the lead role in Parth Samthaan's upcoming web series. If the reports are anything to go by, it will be interesting to see Parth Samthaan sharing screen-space with this Bollywood actress in the web-series. So what do think of this jodi?

Television actress Pankhuri Awasthy, who rose to fame with TV shows such as Razia Sultan, Suryaputra Karn and Kya Qusoor Hai Amala Ka?, is all set to make her Bollywood debut with Aanand L Rai's Shubh Mangal Zyada Saavdhan, which stars Ayushmann Khurrana in the lead role. Confirming the reports, Ayushmann Khurrana, recently dropped the promo and revealed the entire cast of the movie. The one-and-a-half-minute-long animated video introduced us to all the important characters and their real names.

Nach Baliye 9: Pooja Banerjee Gets Injured on the Sets, Opts Out of Salman Khan’s Dance Show

The ninth season of Nach Baliye 9, produced by Salman Khan, saw wild card entrants Pooja Banerjee and husband Sandeep Sejwal join the show this weekend. Fans had been waiting with bated breath to see Pooja and Sandeep enthral them with their power-packed performances but unfortunately, Pooja injured herself while rehearsing for her upcoming performance. The actress, who has hurt her leg and hand, got hospitalised due to the severe injuries. And according to the latest report, Pooja and Sandeep have decided to opt-out of the show.

Salman Khan-hosted Bigg Boss 13 is all set to hit the small screen on September 29. While the show is only a couple of months away from its air date, it has already started to create a lot of buzz though. Now, the latest update on Bigg Boss 13 is that host Salman will launch the new season of Bigg Boss on a metro station. In a press invite, the venue is mentioned as 'Metro Corporation Yard' at DN Nagar in Andheri (West). This is the first-ever time that the Bigg Boss launch will happen at a metro station and we'll get to see Salman interacting with media about the upcoming season at a Metro station on September 23. This unique launch also makes us wonder if Dabangg 3 star is the latest to promote Mumbai Metro after Amitabh Bachchan and Akshay Kumar. Stay tuned!

(The above story first appeared on LatestLY on Sep 22, 2019 11:52 AM IST. For more news and updates on politics, world, sports, entertainment and lifestyle, log on to our website latestly.com).