With the reviews being extremely positive right now, it's great to have the reaffirmation that the show is going to blow our minds. So with that being said, let's take a look at what the reviews for Peacemaker are saying 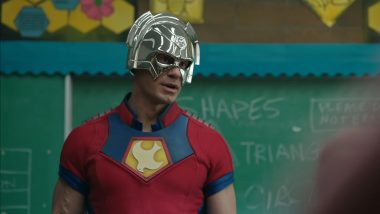 After the success of The Suicide Squad, WB was quick to greenlight Peacemaker by James Gunn. A series for HBO Max, Peacemaker follows Christopher Smith/Peacemaker after the events of The Suicide Squad. The show aims to tell the origins of Peacemaker and how he became the ruthless killer he is. We will also be seeing a new and bigger threat in the show. Peacemaker will be joined by another superhero as well, Vigilante, who will basically act like his side kick. There will be a bunch of returning characters from The Suicide Squad while a lot of newcomers will be present too. Peacemaker Trailer: John Cena Is Here to Entertain Us With His Superhero Actions in HBO Max’s Series by James Gunn (Watch Video).

All the trailers for Peacemaker promise an extremely violent and weird show, something that is definitely expected from James Gunn. With every new trailer for the show, one thing was clear that this was going to be an extremely crazy ride. So with the reviews being extremely positive right now, it's great to have the reaffirmation that the show is going to blow our minds. So with that being said, let's take a look at what the reviews for Peacemaker are saying. The Suicide Squad Movie Review: James Gunn’s DC Epic Is a Violent Delight (LatestLY Exclusive).

Comicbook.com: From the jump, HBO Max's Peacemaker has had a fair amount riding on it — it's the follow-up to a masterpiece of a superhero film, it's the first TV show set officially within the DCEU, and it's centered around a character who is still far from a household name. Still, all of those elements seem to work in the series' favor, allowing for it to tell the action-packed, profane, and bizarre story that perfectly suits its protagonists without any real expectations.

Rolling Stone: The series functions as a sincere character study of its flawed hero — and the unfortunate souls who have to work alongside him — just enough for the joke to never quite wear thin. Even in a wildly oversaturated market for tales of hypermuscular men and women punching their way to justice, Peacemaker stands out. You’ll wanna taste it, even the parts that are in incredibly bad taste.

Consequence: Thanks to the strength of the ensemble, along with some of the wildest action sequences seen in recent memory, the series does deliver a lot of joy, along with the continued reminder that as Gunn’s work as a storyteller continues to mature, it gets better and better. It’s not just that this is a great ensemble of actors — it’s that Gunn knows how to let them shine.

The Hollywood Reporter: For all the show’s feints toward edginess, it colors well within the lines laid out by its predecessors. That’s not entirely to its detriment — it makes Peacemaker a comfort rather than a challenge. Too much familiarity over the course of a season, however, leads to a series that’s easy not to mind watching instead of one that’s hard to quit watching. In its quest to shed new light on a character who came out of his last movie looking dangerously close to outright villainy, Peacemaker loses too much of the darkness that made him compelling in the first place.

Collider:  There are intermittent shining moments, briefly-glimpsed reminders of how Gunn can also thrive in the earnest elements within exaggerated, comic book-rooted comedy — and of course, the soundtrack undeniably slaps. (Good luck getting the opening theme song out of your head after you first hear it.) But what makes Peacemaker such an interesting and compelling character is his unrepentant awfulness, and the series choosing to back-pedal on what could be considered his defining traits only makes for an aggressively fine follow-up.

The first three episodes of Peacemaker release on January 13, 2022.

(The above story first appeared on LatestLY on Jan 04, 2022 03:52 PM IST. For more news and updates on politics, world, sports, entertainment and lifestyle, log on to our website latestly.com).