Yes, your beloved Asad and Zoya are all set to be back, this time reportedly for Zee5. The show which had received an amazing response during its release had wrapped up in 2016. 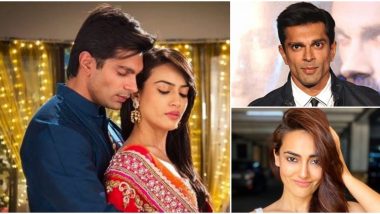 If you have been a Karan Singh Grover fan, this news is sure to make you dance with joy. The heartthrob is all set to return to one of his most popular TV shows and it can't get better than this. One of TV's most loved jodis, Karan Singh Grover and Surbhi Jyoti will be seen re-teaming up with each other for a new digital version of their serial Qubool Hai. Yes, your beloved Asad and Zoya are all set to be back, this time reportedly for Zee5. The show which had received an amazing response during its release had wrapped up in 2016. Qubool Hai Schedule And Telecast Time: Karan Singh Grover and Surbhi Jyoti's Hit Show Returns to Zee TV.

As soon as the reports of a new season for the show hit online, netizens have been celebrating the same and can't wait for the show's new digital season to be out soon. It has been reported that shooting for Qubool Hai 2.0 will begin next month. Considering that the TV serial is now moving to a digital format, we hear the season won't be too long and will have maximum upto 12 episodes. Ishqbaaaz 2, Qubool Hai 2, Iss Pyaar Ko Kya Naam Doon 4 In The Making? Here's What Gul Khan Has To Say About Her Shows Returning To Television!

An official announcement on the show's return along with its original cast is yet to be made although, the celebrations seem to have already begun online. Recently, KSG quit Kasautii Zindagii Kay where he essayed the character of Mr.Bajaj, after that, he was seen with wife Bipasha Basu in Dangerous. As for Surbhi Jyoti, she will be seen in the film Sonam Gupta Bewafa Hai next and previously, was seen in Naagin 4.

(The above story first appeared on LatestLY on Sep 07, 2020 10:58 PM IST. For more news and updates on politics, world, sports, entertainment and lifestyle, log on to our website latestly.com).