Radhika Apte Birthday: Five Short Films Of The Actress And Where To Watch Them

Radhika Apte has a pretty envious career in which she has accomplished a lot even when her list of movies isn't long enough. That only happens when you are as talented as her. On her birthday, however, we will talk about her short films which are equally fascinating. 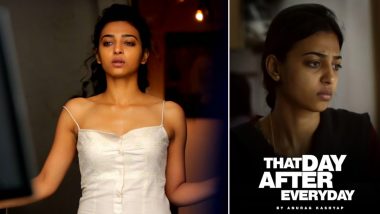 Radhika Apte in Ahalya and That Day After Everyday (Photo credit: Twitter)

Radhika Apte is one of the most talented actresses in the industry. She has done limited films so far but all of them deserve praise. Even when she has been part of commercial films, she chose them with utmost caution so that her role gets merit. Be it Badlapur or Kabali, she never gets overlooked or oversighted. Her presence is all-encompassing and those big beautiful eyes! Radhika has managed to add it her list of movies some incredible gems. These also include a few short films which should be on your watchlist if you are fond of Apte and her histrionics. On her birthday today, let us tell you about five of them and where you can watch them. Saif Ali Khan’s Sacred Games, Radhika Apte’s Ghoul, Pooja Bhatt’s Bombay Begums Feature in Rotten Tomatoes ‘Best Netflix Series’ List

Radhika plays a college girl in this short film that talks about life in college. This also stars Ameya Wagh. You can watch the film on YouTube.

Anurag Kashyap's movie on the menace of eve-teasing takes a look at the stories of three women who fight social evil. While Radhika is excellent in the film, the latter itself is highly motivating. You can watch it on YouTube.

Sujoy Ghosh's interesting and suspenseful spin to the tale of Ahalya has Radhika playing the protagonist. She plays the seductress quite well in this short film that is quite mind-bending. You can watch it on YouTube. Forensic: Vikrant Massey, Radhika Apte Start Shooting for a Crime-Thriller Film in Uttarakhand (View Post)

A short film by a brand of women's fashion wear highlights how women get discriminated against in their careers when they get pregnant. But where there's a will there's a way...a woman's will and way! You can check it out on YouTube.

A story about falling in love or pretending to be in love, Kriti is quite intriguing and interesting. It stars Radhika along with Manoj Bajpayee. You can watch it on YouTube.

Radhika had worked in a Bengali short film Vakratunda Swaha as well but it apparently isn't available anywhere online.

(The above story first appeared on LatestLY on Sep 07, 2021 08:10 AM IST. For more news and updates on politics, world, sports, entertainment and lifestyle, log on to our website latestly.com).