Ramanand Sagar's Life Lesson to His Laxman, Sunil Lahri, Was 'Never Let Success Get to Your Head'

In a recent conversation, Sunil Lahri fondly remembered some friendly advice by his mentor Ramanand Sagar. The actor revealed that he would often engage with the visionary maker on different topics and collected pearls of wisdom. 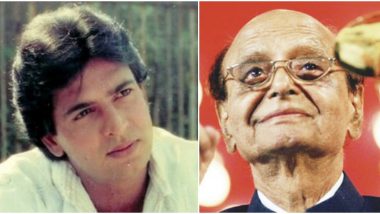 It was Ramanand Sagar's Ramayan that made its actors Arun Govil, Deepika Chikhlia and Sunil Lahri the all famous actors that they became when their show aired. The actors became overnight sensations and received lots of love and adulation from their fans. And just like the case is for most celebrities in the industry, Ramanand Sagar became their mentor and guiding light, at least for Sunil Lahri. Ramayan Actor Sunil Lahri Aka Lakshman Recalls the Time When He Spotted an 8-Foot-Long Cobra in His Dressing Room (Read Details).

Sunil, who played the role of Laxman in Ramayan too has his own share of memorable moments that have helped him to achieve success. In a recent conversation, Sunil Lahri fondly remembered some friendly advice by his mentor Ramanand Sagar. The actor revealed that he would often engage with the visionary maker on different topics and collected pearls of wisdom. Sunil remembers one such dialogue where Ramanand Sagar shared an important life lesson with him. Arun Govil and Sunil Lahri Look Strikingly Handsome in This BTS Picture From Their Ramayan Days and We Just Can't Stop Staring.

He revealed, "Sagar Saheb always called me a black stallion. He had immense faith in me and always encouraged me. He complimented me by saying that I am very talented and I should work hard and be focused in life. He also guided me to not let success get to my head. Be humble and polite to everyone around you. And most importantly to be sincere to my work. I always followed his advice and am still trying to." Sunil Lahri Reacts To Son Krish Pathak Becoming an Internet Sensation, Says 'I Would Be Really Happy If He Becomes More Popular Than Me'.

Ever since first Doordarshan and then Star Plus aired Ramayan, the mythological tale of Lord Ram has been making headlines all over the country and has also been topping the TRP charts. Ramayan has successfully garnered record-breaking viewership even today due to its engaging and simple narrative which has earned a memorable place in the audience’s minds.

(The above story first appeared on LatestLY on May 16, 2020 06:32 PM IST. For more news and updates on politics, world, sports, entertainment and lifestyle, log on to our website latestly.com).