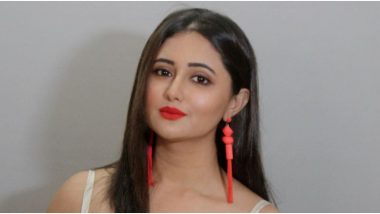 As the tension between India and China gets more intense, in a way, to safeguard the interest of the people, the government of India has banned 59 Chinese apps. The list of the blocked apps includes some popular names like TikTok, UC Browser, WeChat, Shareit, CamScanner and more. As soon as this piece of news was announced online, many celebrities lauded the government's move. Out of the several stars, even Bigg Boss 13's Rashami Desai took to her Instagram and shared a brief video expressing her thought on the ban. In quite a convincing way, the actress made her point clear and how. TikTok Ban in India: Nia Sharma, Kamya Punjabi, Kushal Tandon Laud the Government Move (Read Tweets).

In the video, Rashami starts by saying how the past month has been mentally stressful for one and all. But what we are forgetting is that there are a lot of things happening in India which we ain't paying attention too. Ahead in the clip, she brings the topic on the ban of China-based apps and highlights how the entertainment part can be done later in life. Desai also urged her fans to stand with the Indian Army and government. She concluded by saying that we must stand united, if not for anyone, for our own selves. TikTok, UC Browser Among 59 Chinese Apps Banned by Govt of India Amid Row With China, See Full List.

Check Out Rashami Desai's Video Below:

Can we be a responsible citizen and support the current situation instead of just playing blame games and trolling one and other ? #LetsBeUnited #India #ProudIndian #SupportIndia #ThisTooShallPass 💫

Indeed, such voices do matter as fans actually listen and pay attention to them. We laud Rashami for putting up a video and sharing her thoughts on the current political scenario in the country. More power to your girl. Meanwhile, on the work front, the actress is seen on Naagin 4 as Shalakha. Stay tuned!

(The above story first appeared on LatestLY on Jun 30, 2020 11:19 AM IST. For more news and updates on politics, world, sports, entertainment and lifestyle, log on to our website latestly.com).