In a first in the history of Roadies, the contestants got a chance to watch their journey up to a point, analyse it, and come back with a bang! The upcoming episodes of Roadies are being shot in a bio-bubble in Mumbai with utmost precautions and of course double the fun. 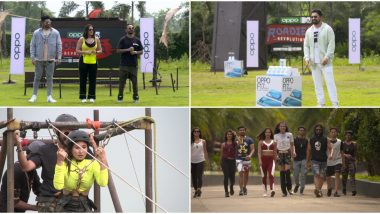 The upcoming week of MTV Roadies Revolution 17 will be full of adventure, entertainment, intense emotions and conflicts, team bonding - the thrilling journey of Roadies Revolution saw it all, until the pandemic brought the world to a standstill. In a first in the history of Roadies, the contestants got a chance to watch their journey up to a point, analyse it, and come back with a bang! The upcoming episodes of Roadies are being shot in a bio-bubble in Mumbai with utmost precautions and of course double the fun. Here are some edgy and interesting incidents to look forward to in the next episode of the show. Roadies Revolution 17: Team Favorites Get a Chance to Snatch 3 Immunities From Team Underdogs.

The charming Shreya Kalra joins the teams. On her entry, Tarandeep and Shreya will be seen locking horns with each other and indulging in fun banter. After conquering the LIVE auditions, will she be able to settle in the already built groups and maintain her position? Which leader will try to include her in their gang? Roadies Revolution 17: Gang Leader Varun Sood Gets Emotional on This Week’s Episode.

This week’s task is called Roadies Premiere League – a three-phase task, based on Cricket, but in a quintessential Roadies way. There will be four teams lead by the Gang Leaders. The first phase is Batting, where one contestant or leader from each team will have to break pots with scoop shots, hanging on ziplined contestants. The second stage is Fielding which involves one contestant to race through a track doing frog jumps. And the final stage is Bowling, where one contestant will have to throw the ball on stumps while being tied to a bungee cord.

Gangleader Neha Dhupia faces another rejection. For the task, all the leaders had to choose their team mates and while selecting them, Neha asked Arushi and Poonam to join her team. Knowing the rivalry between Neha’s captain Pratibha and Arushi, she ditched Neha’s team and hopped in Varun’s team. On the other side Poonam promised to give her 200% in the task, yet she wasn’t anyone’s first preference and when Neha asked her to join, Aakash pitched her to join Prince’s team and this is how Neha loses out of Poonam as well. Will Neha be able to form a power packed team or this task will be a big miss for her? Roadies Revolution 17: Permanent Rivals Arushi and Apoorva Compete for Survival.

Neha throws her bat, but Rannvijay comes to the rescue. In this week’s task, RPL, Neha chooses to bat and at one moment she fills with utmost rage and throws her bat in the air taking out her frustration. The most charming Rannijay will be seen pacifying the situation and get the task on track. But what lead to this action? Will Neha’s team suffer any consequences or get back rolling in the game. Only time will tell.

Celebrity leaders, Varun, Prince and Nikhil stand at 2 stars each and Neha is lagging with 1 star, but with the task, RPL, leaders have an opportunity of winning a star. As we know that stars in the journey will have its own perks, all the four teams will put their blood and sweat to win that star for their leaders. But who will succeed? Will Neha get to even up with the others or one leader amongst Varun, Prince and Nikhil will take a lead?

(The above story first appeared on LatestLY on Oct 29, 2020 05:30 PM IST. For more news and updates on politics, world, sports, entertainment and lifestyle, log on to our website latestly.com).