Actor Sandesh Kulkarni, who plays the character of ACP Tawde in the latest web series Mumbai Diaries 26/11, has opened up on the challenges of shooting for the role while battling clinical depression in real life. 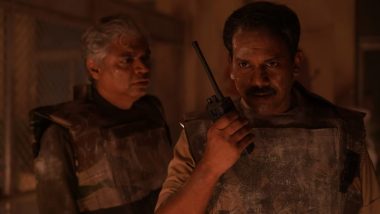 Actor Sandesh Kulkarni, who plays the character of ACP Tawde in the latest web series Mumbai Diaries 26/11, has opened up on the challenges of shooting for the role while battling clinical depression in real life. Talking about the same, Sandesh shared: "My challenge at that time was that I was going through clinical depression. I also had vertigo. Pulling off an angry hotheaded Tawde when your internal world is depressed was really a challenge." Mumbai Diaries 26/11 Director Nikkhil Advani Overwhelmed to See Appreciation for Konkona Sen Sharma, Mohit Raina’s Amazon Show.

"I remember it was my first day of the shoot and I was frozen like a deer in front of the headlights. It was the entry scene where ACP Tawde comes running down the stairs and stops to talk to Dr Subramanium over phone. When you are in depression all your faculties are not sharp. Especially if there is rush. Also, the sudden running down the stairs accentuated my vertigo. I just got blank and forgot my lines as I stood frozen on the stairs," the actor recalled. Mumbai Diaries 26/11 Review: A Weak Retelling of a Tragedy That’s Elevated by Mohit Raina, Konkona Sen Sharma’s Committed Performances (LatestLY Exclusive).

"I really had to take deep breaths and use all my mental energy to get the lines right. Finally I managed to complete it, thankfully for the police who were exhausted running up and down the stairs for each take," he added. Opening up on his character 'ACP Tawde' in the show, Sandesh said: "ACP Tawde represents the spirit of Mumbai Police. His one line 'Ye mera sheher hai' says it all. He loves his city and stands tall to protect it. He has no means that the terrorists have - like machine guns and grenades but he has an unbreakable spirit! As he says he and his team is 'kadak'!"

(The above story first appeared on LatestLY on Sep 16, 2021 05:55 PM IST. For more news and updates on politics, world, sports, entertainment and lifestyle, log on to our website latestly.com).