In tonight’s episode, we see Ishaani (Surbhi Chandna) asking NV (Gaurav Chopra) to give divorce to her. NV is sitting alone and recalls the time he first met Ishaani. He keeps explaining himself to her but she didn’t say a word. 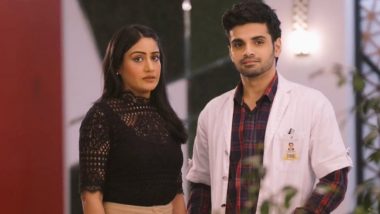 In yesterday’s episode of Sanjivani 2, Rahiil and all the doctors demand punishment for Ishaani. NV tries to tactfully deal with the situation. NV is stunned when Ishaani asks for a divorce. In tonight’s episode, we see  Ishaani (Surbhi Chandna) asking NV (Gaurav Chopra) to give divorce to her. NV is sitting alone and recalls the time he first met Ishaani. He keeps explaining himself to her but she didn’t say a word. Later he recalls their time after marriage. Ishaani gives him divorce papers and asks him to sign it as she has already signed it. Ishaani says that she can’t give any happiness of a wife to him and asks him to give divorce for her. She leaves keeping it inside the side table and leaves. Sanjivani 2 February 11, 2020 Written Update Full Episode: Ishaani Asks NV for a Divorce After Doctors Ask Her to Be Penalised.

NV is holding the divorce papers and says Ishaani that he will not take any decision in haste. He sees Ishaani coming and immediately keeps it back in the table. Ishaani comes there and finds him sitting at the end of the bed. She simply gets on the bed and goes to sleep.

Bebe is doing exercise in the morning when she gets a call. She asks servant about NV and Ishaani who says that they are out early morning without even having their breakfast. She wonders where they would’ve gone. On the other hand, Rahiil is checking Sid’s (Namit Khanna) vitals and finds it stable. He gets relieved when Rishab comes there. He asks where’s Ishaani but Rahiil is least interested in her.

Rahiil says Rishab that it’s already 24 hours since surgery and Sid should have been back to consciousness by then. Ishaani and NV are in the car and Ishaani wonders where he’s taking her. Sid starts muttering Ishaani’s name. Rahil calls Ishaani but NV cuts the call. Rahil gets furious at both Ishaani and NV again. He says he’s enough to take care of his friend. Rishab says that don’t think emotional as Ishaani is needed there to bring Sid back to consciousness.

Ishaani and NV come to Gurudwara where NV  polishes shoes. Ishaani too joins him confused and asks why they are here. NV says that when he was young someone stole his shoes and in anger, he used to hide every one’s shoes. Then Bebe made him understand that wrong will be defeated only by good and they shouldn’t carry hatred in one’s heart. He asks her not to carry hatred as she still loves Sid. He says she should take away the hatred from her heart. He asks will she able to do it and Ishaani looks on wondering what to choose. Sanjivani 2 February 10, 2020 Written Update Full Episode: NV Can’t Stop Watching Ishani, While an Intoxicated Rahil Creates a Scene.

Bebe gets informed of Sid’s condition and she rushes there. Sid starts sinking while Rahiil shouts at her for NV and Ishaani not keeping their words. NV cones there and says that Dr. Ishaani is here. Ishaani comes from behind and finds Sid calling her name. She gets teary-eyed seeing him.

In the precap, NV keeps Ishaani’s hand on Sid and Sid wakes up. He asks her to hold him but Ishaani takes her hand back and runs away. NV looks tensed.

(The above story first appeared on LatestLY on Feb 12, 2020 06:26 PM IST. For more news and updates on politics, world, sports, entertainment and lifestyle, log on to our website latestly.com).