Veer Sahu's track, Thaddi Baddi not just became popular but also made him the 'only Indian singer whose debut song listed in top 20 iTunes.' 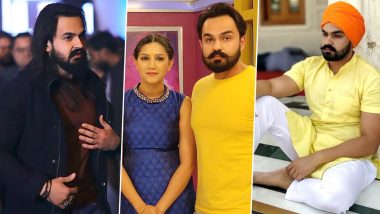 Former Bigg Boss 13 contestant Sapna Choudhary has grabbed headlines once again. However, this time not for any controversy or a new song but her engagement with beau Veer Sahu! Yes, the Haryanvi singing sensation is now taken officially and soon ready to get hitched to her singer boyfriend. She met Veer a.k.a Babbu Mann in 2015 and eventually started dating. He is known for his chartbuster track "Thaddi Baddi" and many more. Sapna Choudhary Gets Engaged to Beau Veer Sahu in An Intimate Ceremony?.

Of course, it was not an easy route for Veer to carve a path in this music industry. He quit his education of MBBS for the love and passion for music. Even though he did not get moral support from his family in the initial phase, he continued chasing his dreams.  But then, his first song "Thaddi Baddi" turned out to be life-altering milestone for him. The track not just became popular but also made him the 'only Indian singer whose debut song listed in top 20 iTunes.' Check out that and more of his songs below.

“I’d like to convey my appreciation towards the individuals who have showered me with huge enjoy in these years. My lovers inspire me to work hard along with anything I am is for these. I am hoping to entertain everybody with my music and that is what keeps me going” an entertainment portal quoted him saying. Sapna being a singing diva herself in the North belt, it won't be surprising if we see the two collaborate in the near future for an album or a music video. Till then, their wedding pictures are much awaited. Stay tuned for more updates on the same.

(The above story first appeared on LatestLY on Mar 17, 2020 11:01 AM IST. For more news and updates on politics, world, sports, entertainment and lifestyle, log on to our website latestly.com).