Shamita Shetty showed her emotional, vulnerable, strong side on Bigg Boss OTT and now it will be interesting to see what she brings to Bigg Boss 15. Read on! 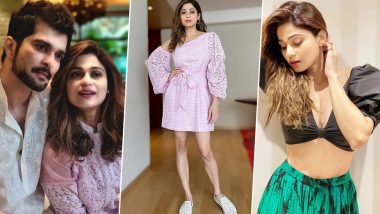 The new season of one of the controversial shows, Bigg Boss is all set to premiere on October 2. Hosted by Salman Khan, this year the reality show will see Shilpa Shetty Kundra's sister Shamita Shetty as one of the contestants. For the unaware, before BB 15, Shamita was part of Bigg Boss OTT on Voot and was the second runner-up. She has also participated in Bigg Boss 3. Shamita made her debut In Bollywood with Mohabbatein in 2000 which also earned her an IIFA Award for Star Debut of the Year – Female. Later she starred in many films like Saathiya, Agnipath, Zeher, Fareb, Heyy Babyy and more. She has also done reality shows namely Jhalak Dikhhla Jaa 8, and Fear Factor: Khatron Ke Khiladi 9. Akasa Singh in Bigg Boss 15: Career, Love Story, Controversies – Check Profile of BB 15 Contestant on Salman Khan’s Reality Show!

Apart from this, she is also known for her dance numbers in Bollywood that include Sharara Sharara from Mere Yaar Ki Shaadi Hai, Chori Pe Chori from Saathiya, and also Mind Blowing Mahiya from Cash. Well, even after working on these many projects, she was unable to wow the audience much. Talking about her family she was born in a Tulu Bunt family, in Mangalore.

When Shamita was inside the Bigg Boss OTT house, she bonded extremely well with TV actor Raqesh Bapat and said to be dating him post the show. Apart from this, there are no link-up rumours of the actress. Having said that, Shamita's name has been part of controversies twice once when she reportedly went sans undergarments at an event with Mukesh Bhatt. Another instance is when she went bra-less at Raveena Tandon's jewellery launch event. Bigg Boss OTT: It’s #ShaRa on Twitter After Netizens Go Gaga Over Shamita Shetty and Raqesh Bapat’s Bonding (View Pics).

Shamita was last seen on ZEE5's Black Widows. She's quite a strong woman and the same she showed inside the BB OTT house. Until now, the confirmed contestants who are entering the show apart from Shetty are Umar Riaz, Simba Nagpal, Akasa Singh, Tejasswi Prakash, Nishant Bhat, Pratik Sehajpal. The other celebs who are rumoured are Karan Kundrra, Vishal Kotian, Sahil Shroff, and Miesha Iyer. Coming back to Shamita, all the best to her for the show. Stay tuned!

(The above story first appeared on LatestLY on Sep 30, 2021 07:00 PM IST. For more news and updates on politics, world, sports, entertainment and lifestyle, log on to our website latestly.com).