Siddhant Chaturvedi Celebrates Three Years of 'Inside Edge', Says 'It Will Always Have a Special Place in My Heart'

Siddhant Chaturvedi penned an emotional note on his social media to mark the occasion and shared pictures with the team of Inside Edge. 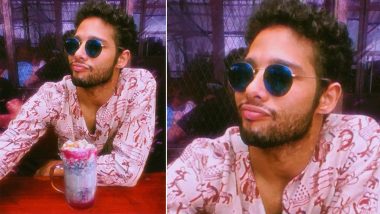 Actor Siddhant Chaturvedi is celebrating the three-year anniversary of the web series Inside Edge. Siddhant had made his digital debut with Amazon Prime Video's sports drama Inside Edge. Celebrating the three-year anniversary of the series, Siddhant penned an emotional note on his social media to mark the occasion and shared pictures with the team of Inside Edge. Siddhant Chaturvedi Is Excited to Work With Deepika Padukone and Ananya Panday in Shakun Batra's Next.

"3 years ago, marked the arrival of the first and the biggest Indian web show on @primevideoin. A game changer sports drama, a life changing part for me and an International Emmy award nominee- INSIDE EDGE will always have a special place in my heart. Even though I won't be a part of the next season, Prashant Kanaujia will always be a part of the Mumbai Mavericks. Happy Anniversary! & Love you guys," he wrote. Siddhant Chaturvedi Shares His Dance Video Grooving to Ed Sheeran’s Song Autumn Leaves.

Siddhant was praised for his performance as Prashant Kanaujia in the series. He had reprised his role in the second season of the series.

(The above story first appeared on LatestLY on Jul 10, 2020 11:42 PM IST. For more news and updates on politics, world, sports, entertainment and lifestyle, log on to our website latestly.com).