Star Wars The Bad Batch Review: A Few Flaws Aside, the Spinoff Animated Series Sets the Course Right for Itself (LatestLY Exclusive) 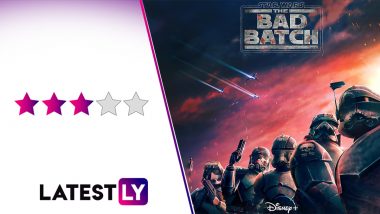 Star Wars The Bad Batch Review: Star Wars' new spinoff series on Disney+ (Hotstar) has a not-so-enviable task of following the much acclaimed and popular The Mandalorian. It helps that The Bad Batch is an animated series, and therefore, can't exactly be compared on the same yardstick as a live-action spectacle when it comes to the making. However, when it comes to creating a really good first impression, The Bad Batch's first episode (created by Dave Filoni) called Aftermath doesn't always hit the mark, but is decent enough. Star Wars: The Bad Batch to Premiere on Disney+ Hotstar From May 4!

Star Wars The Bad Batch starts immediately in the timeline where the finale of Revenge of the Sith is set. The title refers Clone Force 99, a group of five genetically engineered clones who are different from the rest of the clones employed for the Republic. Their 'defects' allow them to think and operate independently which sets course for their actions later on when the Republic falls and the Empire rises.

The Bad Batch, consisting of Hunter, Wrecker, Tech, Crosshair and Echo, are first sent to save a Jedi and her Padawan, Caleb. At that moment, that infamous broadcast of Order 66 is given, leading to the clones killing the Jedis everywhere and giving way to Palpatine's Empire. That sets the ball rolling for Hunter and his group, as they see conflict both within themselves and also when it comes to following orders as to whom to save and whom to kill.

Just FYI, The Batch Batch is more of a spinoff series for animated series The Clone Wars; the title reveal is more than proof of that, as name 'The Clone Wars' burns its way out to show 'The Bad Batch' (leaving me confused for a moment as to if I had clicked on the wrong show). So for a better understanding of the show and most of its characters and the lore, do check out The Clone Wars series, which is quite enjoyable if you are a great Star Wars fan.

For the first episode, The Bad Batch may have not got a fantastic start, but it does a nice job of setting up where the events are headed to. The primary problem with the series is that you don't really root for the protagonists, save for the fact that they are, well, the protagonists. Save to some extent for Hunter and the deceptive Crosshair, the other Clone 99 mates aren't as developed. Wrecker even comes off as annoying. Hopefully the episodes ahead do a better job of developing them better as characters. Star Wars Day: From A New Hope to The Rise of Skywalker, the Correct Chronological Order to Binge-Watch Major SW Movies as Per Timeline.

Another issue I like to point is that while the animation looks to be improved from The Clone Wars, the 'expressions' on the faces aren't always convincing.

Apart from these issues, I found the first episode of The Bad Batch quite interesting and living upto the Force of Star Wars. There are some nice moments in between, especially a simulation test for Clone 99 batch that soon turns deadly. Even the opening sequence is quite good. Familiar faces from the movies like Moff Tarkin, Emperor Palpatine, Saw Gerrera also drop in to keep things rolling.

- Off to a Decent Start

- Not As Impressive As Compared to the Previous Offering

The first episode of The Bad Batch might not take off on an earth-shattering note, but it is nonetheless a harmless start that can be lapped up by Star Wars geeks. Star Wars The Bad Batch is streaming on Disney+ Hotstar.

(The above story first appeared on LatestLY on May 04, 2021 09:38 PM IST. For more news and updates on politics, world, sports, entertainment and lifestyle, log on to our website latestly.com).