After failing in working at Sodhi's garage, Popatlal realises that hard labour is not his cup of tea. After trying his luck with Taarak Mehta and then Jethaalal and not finding anything, he decides to push a vegetable cart, Madhavi sees how desperate Popatlal is and offers him a partnership in her aachar-paapad business. 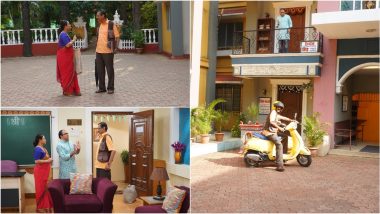 The upcoming episode of Taarak Mehta Ka Ooltah Chashmah will witness a historical moment as Bhide offers Popatlal the key to his scooter - Sakharam, something that he has never done before. It is a known fact that Sakharam is very close to Bhide’s heart and the scooter means the world to him. However, in a turn of events, the situation has come to a point where Bhide gets cornered and has to surrender Sakharam to Popatlal. Taarak Mehta Ka Ooltah Chashmah Episode Update: Popatlal Gives Up His Mechanic Job, Becomes A Vegetable Vendor.

Seeing Popatlal’s resolve to find work, Madhavi offers him to join her in her aachar-paapad business. After realizing that hard labour is not his cup of tea, Popatlal approaches Taarak Mehta and then later Jethaalal but unfortunately has no luck with finding a job at either place. But when he decides to push a vegetable cart, Madhavi sees how desperate Popatlal is and offers him a partnership in her aachar-paapad business. Taarak Mehta Ka Ooltah Chashmah Episode Update: Popatlal Turns Mechanic, Exchanges The Pen For A Spanner.

She invites him over and in Bhide’s presence discusses how they can work together. Since Bhide has been completely tied up with online tuitions, he has been finding it increasingly difficult to accommodate the delivery of Madhavi’s orders. But if Popatlal could help her manage the deliveries then it could be a win-win situation for them all.

Popatlal is thrilled to finally have a job that he can easily take care of. But this also means that Bhide will have to hand over his dearest Sakharam to Popatlal for managing the deliveries. Popatlal reassures Bhide that he will take care of Sakharam as he would take care of his own umbrella. But if everything turns out to be as smooth as expected, where would be the fun in that! We wonder what trouble with Popatlal and Sakharam get into now.

(The above story first appeared on LatestLY on Nov 26, 2020 04:46 PM IST. For more news and updates on politics, world, sports, entertainment and lifestyle, log on to our website latestly.com).