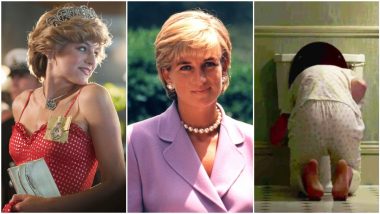 Emma Corrin in The Crown, the real Princess Diana, a scene from The Crown season 4 (Photo Credit: Twitter)

The fourth season of the royal drama, The Crown, streaming on Netflix, has been met with mixed reactions. However, it has also been a season that has got a lot of attention for bringing the late Princess Diana into the show. The former spouse of Prince Charles, the present heir to the throne, Prince Diana was killed in a fatal car accident on August 31, 1997, along with her escort, Dodi Fayed and the driver. In the series, she has been played by actress Emma Corrin. The Crown Season 4 Review: Olivia Colman, Tobias Menzies, Emma Corrin, Josh O’Connor’s Netflix Drama Is A Royal Treat, Say Critics.

One of the most talked about aspects of the season, now proving to be controversials, are the scenes depicting Diana's bulimia. For the uninitiated, Bulimia refers to a eating disorder, potentially life-threatening, which involves the afflicted to binge-eat large amounts of food and go to desperate measures to get rid the excess calories from the body. From Overuse of Laxatives to a Change in Physical Appearance, Subtle Signs of Eating Disorder That Often Goes Unnoticed!

In The Crown season 4, there are scenes where Diana is seen trying to excessively vomit the food she ingested, with the show hinting that it is her royal marriage that could have triggered the bulimia.

Watch the Trailer of The Crown Season 4:

However, as per an article in The Sun, the royal experts have slammed the show for its 'graphic' depiction of Princess Diana's bulimia scenes. Speaking to The Daily Mail, Royal Editor Ingrid Seward said, "It was a significant thing in her young life, so I think it needed to be depicted in some way. It would have been absolutely fine having her bending over the loo, but I don’t think you need quite such detail. I think it perhaps was a bit over embellished." The Queen’s ex-press secretary Dickie Arbiter, while agreeing that Diana’s story cannot be said without mentioning her episodes of bulimia, said, "The script is fiction, the words are fiction and some of the actions are fiction." The Crown Season 4: Emma Corrin’s Uncanny Resemblance To Princess Diana Will Leave You Awestruck! (View Pics).

Netflix, however, has added a disclaimer in the episodes that show bulimia that reads, "The following episode includes scenes of an eating disorder which some viewers may find troubling. Viewers discretion is required."

Interestingly, it was Emma Corrin who insisted that the bulimia scenes be retained in the show. Speaking to Radio Times, she had said, "“I felt that if we were trying to depict bulimia in an honest way, we had to actually show it. Otherwise it’s a disservice to anyone who has been through that." The Crown Season 4 also stars Olivia Colman (Queen Elizabeth II), Tobias Menzies (Prince Philip), Helena Bonham Carter (Princess Margaret), Gillian Anderson (Margaret Thatcher), and Josh O'Connor (Princes Charles).

(The above story first appeared on LatestLY on Nov 16, 2020 06:53 PM IST. For more news and updates on politics, world, sports, entertainment and lifestyle, log on to our website latestly.com).