The Married Woman: Monica Dogra Opens Up About Her Upcoming Web Series, Says ‘Have Said No to Item Songs Many Times’

Actress Monica Dogra made her mark with her Bollywood debut film, Kiran Rao's Dhobi Ghat, in 2011. She will be back in action in the web series, The Married Woman. The series has been directed by Sahir Raza and will air on ALTBalaji and ZEE5. 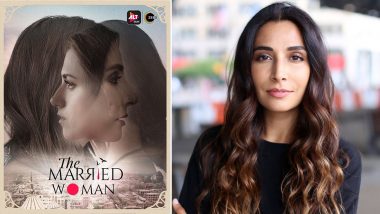 Actress Monica Dogra made her mark with her Bollywood debut film, Kiran Rao's Dhobi Ghat, in 2011. However, despite a few other releases, she never really managed to find a foothold in the industry. After being seen in a couple of films such as David (2013) and Teraa Surroor (2016), Monica will be back in action in the web series, The Married Woman. The Married Woman Teaser: Ridhi Dogra Is Trying to Look For a Lost Piece of Herself Which She Finds in Monica Dogra (Watch Video).

On her part, Monica says she has never liked the way women are objectified in Bollywood films and has especially steered clear of dance numbers. "Item song is a no-no for me. I have said no many times. I am personally not interested in representing a woman as an object. I think we are so much more than that. I just wouldn't do an item song," she says. A Married Woman Teaser: Ridhi Dogra and Monica Dogra's Same Sex Love Story in ALT Balaji Series Looks Promising (Watch Video).

Her upcoming series is an urban relationship drama showcasing the conditions levied on a woman by society. It is about women and the choices they make. Talking about the show, Monica says she was on board with the idea instantly, as the story really appealed to her.

"The initial meeting with the producers and the writers were brilliant. The way they described the characters excited me to play someone so dynamic and layered. The show is so relevant for today," she says.

Monica shares a kiss with co-star Riddhi Dogra in the show. Ask her if she feels the Indian audience will accept and appreciate such a plot, she says: "I don't go into something thinking whether people will accept it or not. I was aware of the obstacle. I think it is wisdom that teaches you to be aware of that."

She continues: "Personally, I am someone who feels passionately about the transformative power of art. Art and artistes have the responsibility to be the change and inspire people. I did not have apprehensions, I was so excited to tell a story which was this honest knowing that there was no way that this story won't open people's hearts and transform the way they feel and view love, religion and politics." The series has been directed by Sahir Raza and will air on ALTBalaji and ZEE5.

(The above story first appeared on LatestLY on Feb 26, 2021 01:57 PM IST. For more news and updates on politics, world, sports, entertainment and lifestyle, log on to our website latestly.com).