The Married Woman Teaser: Ridhi Dogra Is Trying to Look For a Lost Piece of Herself Which She Finds in Monica Dogra (Watch Video)

Alongside the two ladies, the show also stars Suhaas Ahuja, Rahul Vohra, Ayesha Raza, Divya Seth, Imaad Shah and Samridhi Dewan and will premiere on March 8 on Zee5 and ALTBalaji. 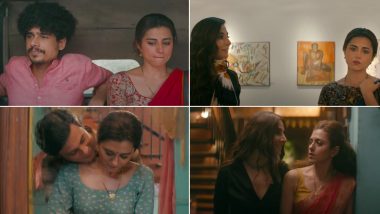 Ekta Kapoor has always tried to make shows that are intriguing and have a message for the viewers. In the same attempt, she decided to adapt Manju Kapur’s book of the same name into a web show titled The Married Woman. While she made the announcement back in 2020, the show did not happen until now because of the pandemic. Ekta made the announcement of the release date of the show in the afternoon today and now the fans have been treated with an intriguing teaser of the show. A Married Woman Teaser: Ridhi Dogra and Monica Dogra's Same Sex Love Story in ALT Balaji Series Looks Promising.

The teaser of The Married Woman begins with beautiful glimpses of Ridhi Dogra's character Astha. Set in the backdrop of 1992, Astha is a simple woman living a simple life. She is seen getting close to a colleague while her happy marriage is getting scattered in hindsight. Enters Monic Dogra, who is an artist. She is seen creating different art, out of which one attracts Ridhi's character. This blossoms a friendship which turns into attraction later. What happens when these two characters fall in love is what the fans will get to see in the show.

The official synopsis of the show reads, "She was everything society wanted her to be, a good daughter, a good wife, a good mother; she was fragments of lost pieces of herself. But then, love happened! This is Astha's journey as her heart finally chances upon a connection that satisfies the craving of her soul." Seeing the teaser, we are quite sure that the show will be loved by the audience. The Married Woman Poster: Ekta Kapoor Unveils an Appealing Glimpse of Ridhi Dogra and Monica Dogra’s Web Series.

The Married Woman will also mark Ridhi Dogra's digital debut. Alongside the two ladies, the show also stars Suhaas Ahuja, Rahul Vohra, Ayesha Raza, Divya Seth, Imaad Shah and Samridhi Dewan and will premiere on March 8 on Zee5 and ALTBalaji. The trailer of the web series will be out on February 13.

(The above story first appeared on LatestLY on Feb 09, 2021 09:18 PM IST. For more news and updates on politics, world, sports, entertainment and lifestyle, log on to our website latestly.com).